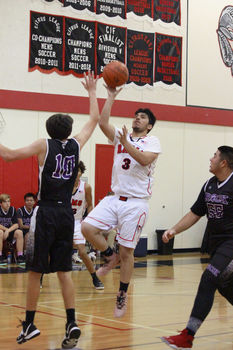 The Borrego Springs Rams boys' basketball team earned a 38 – 25 win, its first of the season, in a non-conference match up against Rock Academy Friday Dec. 4 at home.

It was an aggressive start for both sides, but the Rams had the upper hand, holding the Warriors to just six points in the first half.

"I thought it was a great victory for our guys, we needed that win, Being 1 – 2 now is a lot better than 0 – 2, it's great," head coach Mauricio Polanco said. "We played very aggressive, started off with the aggressiveness that we needed, super fast, which I am very proud. I was preaching that today, and was hoping they would do it, and they did. "

The team also faced the Hamilton Bobcats, which took place after print.

In the game against the Warriors, despite the press defense, junior Juan "Coco" Medina managed to drive through the paint to get the Rams on the board, 2 – 0.

Senior power forward Andres Reyes put up a floater to add to the score.

It seemed the rim and the ball were not connecting for either team, as it was back-and-forth until midway through the first.

Junior forward Cam'mron Jambor got the steal and converted it into a layup, followed by a jumper by Reyes on the left side.

The Warriors stopped the Rams' run with back-to-back shots, 8 – 4, to cut their deficit in half.

In the second quarter, the Rams continued where they left off.

Senior guard and forward Ty White added a free throw for the Rams. Reyes drove through the paint, forcing himself up over three defenders to get the shot.

His run did not stop there and managed to get a jumper on the right side of the key, and completed a three-point play, as the Rams led, 18 – 5.

It was all Rams ball, with the offensive focus and shots by Jambor, White and Reyes.

The Warriors got one last free throw before halftime, as the Rams led, 26 – 6.

The third quarter seemed like a whole new ball game, as the momentum began to shift favoring the Warriors.

Their shots began to connect much better, and their defense held the Rams to just seven points.

To begin the third, Jambor found an opening to steal the ball for a layup.

Jambor broke that run with a floater in the paint, followed by a free throw by Reyes, 31 – 17, but the Rams still led heading into the fourth.

It was a back-and-forth game for both teams in the fourth quarter, but the Rams did not let the game slip and despite the Warriors efforts, it was not enough.

The Rams earned their first win of the season, and Polanco hopes to keep the momentum going.

"We have to refine our defense. We started out still playing a bit sloppy here and there, with a few mishaps and players forgetting where to go and what they are doing, so as a team I'd like to be better on defense," Polanco said.

The Rams are back on the road to face the Royal Knights of Calvary Christian Academy in a non-conference game Friday Dec. 13, 5:15 p.m.