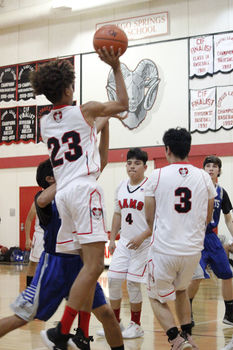 Hoping to get another win in the books, the Borrego Springs varsity boys basketball team faced off against the Hamilton Bobcats Dec. 10 at home.

Despite being tied going into halftime, the Rams could not keep the rhythm going, and were bested by the Bobcats in the second half, resulting in a 58 – 43 loss.

"I thought we started a little better than we have in the past games. We started the game strong, went in tied at the half, but we just didn't come out of the second half as hard as I wanted to or normally do," head coach Mauricio Polanco said. "We didn't bring it, and committed silly turnovers, Hamilton started to make their shots behind the arc, which always make a difference, and we just got beat."

The team had a short break and faced the Royal Knights of Calvary Christian Academy a few days later. The Rams fell short, 48 – 37.

The Rams had another shot at the Bobcats Dec. 20 on the road, and Polanco hoped to work on their defense in hopes of a different outcome.

"Our defense was horrible. We had a couple of people missing for practice so they didn't get the chance to work on the couple of plays we put in, and they were really slow on getting back on defense and it showed for us," Polanco said.

Against the Bobcats in the first matchup, the Rams were on the board early with a three-pointer by junior guard Cam'mron Jambor, 3 – 0.

With 3:18 left to go, senior point guard Ty White got the steal and put it up for a layup. Jambor then managed to drive down the middle to put one up, and the Rams took the lead, 7 – 6.

It was back-and-forth in the last two minutes of the first, but the Rams had the upper-hand, and led 13 – 10.

The two teams exchanged free throws to begin the second quarter, and continued the back-and-forth rally.

The Rams had their biggest lead yet with 6:41 left in the second, after Jambor found junior guard Blaine Shugart open on the right side of the basket, 16 – 11.

However, it was soon lost as the Bobcats caught up to be within one.

Thirty seconds left to go, Jambor tied the game at 21 with a layup.

It was a different story in the second half, as the Bobcats found their momentum.

The Rams started off the third with back-to-back jumpers by Jambor to break the tie, 25 – 21.

However, the Bobcats put up back-to-back three's, in which they could not stop. That same player hit a total of six clean shots behind the arc.

White and sophomore forward Daniel Arias put up a couple of shots for the Rams, but they were still down 36 – 29.

The Bobcats went on a 6 – 0 run to begin the fourth quarter, and was stopped midway by a free throw from Reyes.

Despite their last minute efforts in the fourth quarter, the deficit was too much to overcome, as the Rams fell, 58 – 43.

With the season progressing, and the team beginning league play soon, Polanco hopes to have the team working better as a unit on both sides of the court.

The team is back in action Friday Jan. 10, 2020 in a non-conference away game against Horizon Prep. Game starts at around 6:30 p.m., after the girls.