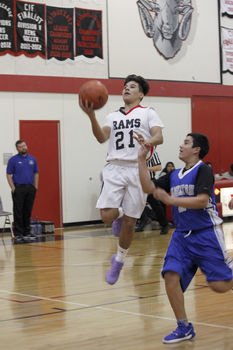 It was not exactly the outcome they had hoped for, with a 49 – 19 loss, but head coach Tim White was impressed at their efforts in their first game.

"They were super nervous, and you could tell Hamitlon's kids were much more prepared than we were. It was great to have a few more players come out, but it was a bit difficult to incorporate everything in such a short amount of time. It's gonna be a work in progress," White said. "So I'm proud of the effort, and with JV, that's what it's all about for me; an opportunity for them to learn and grow. So I'm not really looking at the score and worried about that too much."

The two teams were back at it again on Dec. 20, this time at Hamilton in Anza.

The team was held to just six points in the first half – four in the first, two in the second – and the deficit was too much to take the lead.

The game started off with the Bobcats beginning their take over, with points in each minute.

With 1:16 left in the first, freshman guard Julio Medina hit a jumper over a Bobcat in the paint to get the Rams on the board.

Freshman guard Even Padilla then managed to get a steal, putting up the layup, 11 – 4.

The second quarter was a rough one for the Rams, as they were only able to score two, when Padilla put up a floater from the middle.

Heading into the half, the Rams found themselves down, 21 – 6.

There was not much the Rams could do to slow down the Bobcat offense, who seemed to be finding the basket quite easily, as they added to the scoreboard.

With 5:05 left in the third, freshman guard Dylan Rodriguez hit a three-pointer from the right side to get the bench going, 32 – 9.

The Rams got four more shots and a free throw in the fourth quarter, however, it was not enough to overcome the deficit that started early in the game.

Despite what the scoreboard said, the Rams fought hard and their future looks bright.

White notes that they have not played together as a team as much as other JV teams, but knows they will get better and prepared for games throughout the season.

"We need to be able to run our offensive sets efficiently. We turned the ball over way too much tonight, and had guys who didn't really know their assignments and it showed," White said. "Defensively, we had some lapses and struggled at boxing out. We need a better rotation and better understanding where we're supposed to go defensively and just knowing our spot on the court.