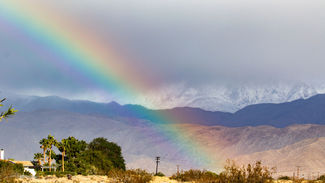 Rising in the mornings of Nov. 28 – 29 to see snow on the peaks of our mountain triad – the Santa Rosa's and Toro Peak to the north, the San Jacinto's to the west, and the Valecito's to the south – it was a gorgeous sight to behold. That spectacular view lasted at least two whole days.

If you happen to be a Snowbird from Northern California, Oregon, or Washington, count your blessings concerning the mere spattering of rain here in Borrego Springs over the past week or so, because the last time AccuWeather was checked (Friday Dec. 6,) those three regions have, by comparison, been pummeled by the latest onslaught of rain.

Montezuma Valley, including Ranchita, received a few inches of snow over the Thanksgiving weekend, and the storm also brought just over an inch of rain to UCI's weather gauge in Ranchita. Many were unable to pass through at all or chains were needed for those couple of days due to the road conditions.

In the months of September, November and early December of 2019, up to Dec. 6, the Park rain gauge measured 2.27 inches of rain, well in line with the 2.15 inches last year covering the same months.

This season's rain bodes well for bighorn sheep and other wildlife, and it could add more than a few drops to our aquifer 40-50 years from now when some of it percolates down a couple hundred feet or so. The amount of rainfall preceding the Super Bloom of 2016 during the same three months listed above was 2.77 inches. So with our current season accumulation at 2.27 inches, wait for it, another possible Super Bloom could be in the offing!.

If that is, as stated in our Nov. 28 issue, ideal conditions persist through February and into March, namely light to moderate rains followed by sunshine, but no frost prior to seed germination and flowering. In total control of that sequence of events is, of course, Mother Nature.

The review in the Nov. 28 issue, showing we're at the bottom of the trough of the 11-year and 22-year sunspot cycle number, seems to be holding up in regard to its possible mathematical correlation with precursors to Super Blooms and such.

Science is nothing if not predictive, so stay tuned.