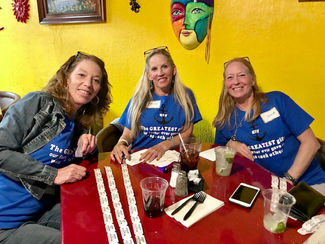 Meeting Diana Fox, Anna Marie Leonard, and Brandi Harris at the Sundowner on Nov. 15 was a "union" of three siblings, self-dubbed the "Ely Orphanz" (pronounced Ee-lee), who had never met all together before coming for a visit to see Diana and experience her Borrego Springs community.

What follows is a story of a father's abandonment of two of his girls at a young age, and regrets by all three that they couldn't have met up sooner and connected as a family. It's also about persistence and resilience leading to positive choices made by these three remarkable women, especially with respect to the lives of their children and grandchildren.

All three half-sisters had the same father, Bob Ely. He was a career Navy man who, to be charitable, was an unfaithful husband and a worse father. He abandoned his wife and the eldest Ely daughter Diana in 1964 when she was three years old, and spent three tours in Vietnam serving with the Rat Patrol in river boat operations. Diana did meet her father, but only after 30 years of his absence and benign neglect.

After Vietnam, Bob returned to Norfolk, Virginia, where he met up with his childhood sweetheart, Anna Marie's mother. Anna Marie was born in 1968, but true to form, Bob departed the family scene again, refusing to help raise her, and that included not providing a lick of child support. They kept up the absolute minimum of a relationship over the years via few phone calls and an occasional visit, but it was strained.

Brandi was born out of wedlock in 1972, and Bob disappeared from her life forever shortly after. "All my mother told me about him was that his name was Bob, and that he'd come in on a boat to Norfolk, Virginia." Even after 47 years, says Brandi, "That's all I've known my whole life."

Bob notified Diana in 1989 that she had a half-sister, Anna Marie. Diana attended Anna Marie's high school graduation with Bob, and both Diana and Anna Marie remarked on their similar dispositions, character, and attitudes. "It was like we'd known each other forever."

Despite their initial meeting, Anna Marie says she was "rebellious" and didn't give the relationship too much import, nor did she say anything to Diana about Brandi, who she had earlier learned about from her father. So Anna Marie went about her life, met and married "a really nice guy" who was very supportive, and lost contact with Diana.

Anna Marie became a real estate agent, then a paralegal, but gave up a professional life to raise a family and deal with her epilepsy, since under control, but possibly an inherited and dangerous condition that surfaced only at night when asleep.

As far as her father was concerned, Anna Marie says, although she knew him in a general sense as pretty much "a telephone dad" her whole life, the relationship included half a dozen visits back-and-forth. "I felt ignored" rather than abandoned.

It wasn't until Brandi's mother died in 2002 that Anna Marie discovered, via letters, that her mother and Brandi's mother had been in contact the whole time. More importantly, Anna Marie had learned earlier from her mother that she had another half-sister, Diana. Not only had Brandi's mom never disclosed to Brandi either of her two half-sister's existence, but also that Bob was practically on his deathbed when he "apologized" to Anna Marie for not being an integral part of her life and finally confirmed to her the existence of Brandi.

It took until 2007 for Diana and Anna Marie to finally get around to conducting a search for Brandi, with Anna Marie using her paralegal experience to conduct research based on the content of the letters. There was some urgency to make contact because she wanted to inform Brandi of the epilepsy matter.

After 12 years of on-and-off searches, Diana finally found Brandi on Facebook. On Sept. 6 of this year, she communicated, somewhat cryptically, and not directly but via Messenger, about a probable relationship, including the epilepsy concern.

It took two weeks for Brandi to reply, "Please contact me, you've taken my breath away!" And what followed was a hasty plan for Brandi and Anna Marie to meet up in Chicago and then fly together to San Diego to meet Diana.

At the airport "union," Diana had a big welcoming sign at the ready, and the occasion was nothing short of exciting and emotional for all three stepsisters.

Diana, now 58, owns a successful retail business in town, The Chief; Anna Marie, 51, is happily married with a family; and Brandi, 47, is a former rodeo barrel racer, also happily married to a very supportive husband, and very proud of her daughter serving in the U.S. Marine Corps. She is also a grandmother.

Anna Marie is also happily married and has children she adores.

Suffice it to say in Brandi's case that her mother failed major tests of judgment and truthfulness throughout Brandi's life. The reasoning behind keeping the existence of a flesh and blood sibling from Brandi was, as was the case with her father, buried when Brandi's mother died in 2002. Brandi's "sister" while growing up was also in on the deception, and to this day Brandi cannot fathom any reason, much less a good one, for her doing so.

When the three siblings came to Borrego, Diana showed them our natural wonders – the Park, the Ricardo Breceda sculptures, and even some Bighorn sheep at de Anza. It was high time to catch each up on their lives and connect with each other. And connect they did, talking and laughing and carrying on just like family. "They loved Borrego," Diana said.

Full article in the Dec. 26 issue of the Borrego Sun.