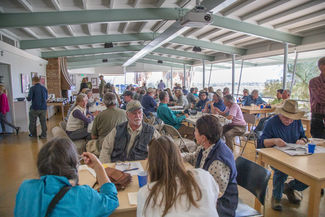 It’s an annual migration as predictable as the swallows returning to Capistrano. This migration, however, is the arrival each year of volunteers engaged the annual census of bird species in Borrego Springs.

This marked the 35 year that citizen science volunteers have participated in the annual Audubon Christmas Bird Count as they fanned out Dec. 16 in a 15-mile circle to conduct the bird survey in Borrego Springs.

This year nearly 90 volunteers participated in the count that is part of the National Audubon Christmas Bird Count conducted at thousands of locations in North America around the Christmas Holiday season. The count began 120 years ago when 27 birders headed out on Christmas Day after their holiday meal.

Today, more than 80,000 counters at 2,500 locations are included during the count period that extends from mid-December through early January. The important data collected provides Audubon and others with a valuable record of the health of bird populations, migratory trends, habitat conditions and other information critical to preservation of wild bird populations and conservation efforts.

Each count involves volunteers scattering to various locations within a circle that is 15 miles in diameter. The Borrego Springs circle is centered on De Anza Country Club. Other count circles include Salton Sea, Lake Henshaw, Escondido, Rancho Santa Fe, Oceanside and San Diego.

For the past 26 years, the Borrego count has been coordinated by retired Anza-Borrego State Park ranger Bob Theriault. He announced this year that he is retiring, and a committee of birding experts will take over coordination of the event.

Theriault was recognized for his leadership with several gifts. He recalled that the Borrego count began as a trail in 1983, followed by the first “official” count in 1984 with 38 volunteers recording 88 special and 5,958 birds.

At press time, the Borrego count had identified 114 species, but Theriault said there were still some reports outstanding from teams that worked more remote areas. This count total compares favorably with the 122 species observed last year and 117 tallied in 2017. More than 9,000 individual birds were observed.

Some of the most notable sightings included Eurasian Wigeon, green-tailed towhee and a vermillion flycatcher. Some of the most frequently observed species included winter visitors white-crowned sparrows and yellow-rumped warblers, and resident black-throated sparrows.

The varied terrain covered in the Borrego Circle offers both challenge and opportunity for counters. More remote areas require teams to be up well before dawn to hike or travel by four-wheel drive to remote locations such as Borrego Palm Canyon, Coyote Canyon or the San Ysidro Mountains at the eastern fringe of the Los Coyotes Indian Reservation. All of these areas are within the 15-mile circle. That also means counters can expect to see everything from local resident desert birds, to mountain species and winter migrants.

Some of the census locations include Borrego Valley residential areas, Borrego Sink, upper desert elevations such as Culp Valley and local agricultural fields.

A count tradition is a chili and cornbread lunch, provided by volunteers, including Marie Holly, Holly Barnes, Lee Holly and Sharon Dall.