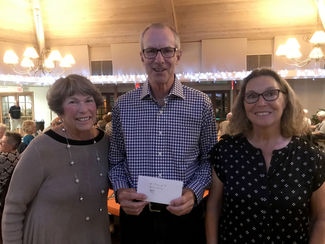 For the first golf tournament mixer of the Season at the RoadRunner Club, played on just another beautiful November day in Borrego, expectations were high that my three-person team, out of 13 teams, would be a contender for top honors.

After all, I'd been openly expressing for years my desire to play in a tournament with Betty Bortis, one of the RRC's top women players. I figured that playing together, me a six-handicapper and she a 13, we'd be unbeatable.

My single concern was how our third team member, 21-handicapper Lloyd Richard, would fare coming off surgery. Turned out Lloyd played one of his best games at net seven-over par and had a great time!

By the end of our Front-9 (we began on the course Back-9), I had used the entirety (plus one) of my handicap.

Contributing to that collapse were two of my holes, one a four-putt, triple-bogey disaster, and the second being a result only the golf gods appreciated. We paid for two mulligans, to be used at any time on any hole. I missed a two-footer and took my first mully.

I reset, lined up, and promptly missed the putt again. Rather than give up on such a short putt and move on, I was determined to sink it and save my second mully for later. I missed it again! From two feet, for cryin' out loud. To be fair (to me), "The Putting Queen" was a bit off her game, too, so that didn't help.

Shortly thereafter I announced to Betty and Lloyd a strategic retreat to a back-up goal: Not to finish last! The inevitable ridicule and abject embarrassment resulting from our team finishing in 13th place would, considering my original goal, be too much to bear, and I would surely have to call the golf suicide hotline for emotional support.

On our Back-9, we actually squeaked out a combined one-under par, leaving us at a score of 112, "only" four-over for the tourney. That alone showed up like a claim to victory, albeit a minor one, sort of.

After some fine hamburgers cooked on the patio BBQ (during the rain) by tournament chair Mike McCalvy, and with able assistance from Bob Scribner, plus all the fixings, we all settled in to eat, drink, and await the tourney results. My team quickly shot past the exit of hope of not finishing last when Betty's husband, Brian, smugly announced at our table his team's score of 110.

The winning score was 96, a whopping 12-under par. The winning team of Barbara Coates, Bruce Kelley, and Sharen Frazier was all smiles and delight. Our team was, considering the 16-stroke difference between First place and 13th, well, something else entirely – definitely exceeding embarrassment – as evidenced by the accompanying photo.

In the world of team tournament golf, it's not your score, but rather how you did in comparison to others. By that metric, my team sucked. In the world of local golf, however, there's always another beautiful day ahead in Borrego where hope springs eternal.