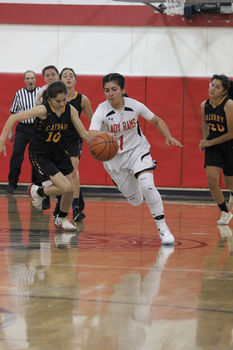 After holding the Lady Royal Knights of Calvary Christian Academy to just three points in the first half, the Borrego Springs High School girls basketball team maintained their lead throughout the rest of the game, winning 35 – 20, Friday Nov. 22 at home.

This was the first game of the season the team played, after two forfeits by Julian and one by Bonsall. With the win, it pushed them to 4 – 0 to begin the 2019 – 20 season.

White, Borrego's athletic director, is temporarily filling in for head coach Justine Smiley, who is on maternity leave with her second child.

Veterans senior forward and center Delaney Barclay and junior guard Marla Manzano led the way for the team, but White hopes to have the scoring much more spread out as the season progresses.

Manzano was also selected as MaxPreps' Player of the Game for Borrego Springs.

"Marla and Delaney came back with a lot of experience and running the show for us, but I thought everybody else around them did a great job as well," White said "We also got everybody in off the bench, which is great in the first game to be able to play everybody that's put a lot of time, effort and energy in the pre-season getting ready."

The Rams were on the board first after a pass by junior forward Laurynn Strate to Barclay for the jumper.

Manzano went on a hot streak with consecutive steals, Lady Rams up 10 – 0.

With 24 seconds left in the first quarter, the Lady Royal Knights were on the board after a free throw by senior guard Nauni Hernandez.

Midway through the second quarter, Barclay scored for the Lady Rams after a steal, 12 – 1.

Hernandez answered right back for the Lady Royal Knights, but Manzano and Barclay scored back-to-back, 16 – 3.

After starting the third quarter right where they left off, the Lady Rams led 20 – 3.

The Lady Royal Knights started get something going after a three-point play and a shot at the top of the key, but still trailed.

Manzano started the fourth off with a three-pointer and a steal, and Barclay with a layup to push the Lady Rams up, 33 – 9.

CCA managed to find a bit of rhythm connecting with the basket better, but still trailed, 33 – 16.

CCA scored twice more with less than a minute left, but it wasn't enough, as the Lady Rams sealed the game.

Aside from spreading the ball out more, White hopes to work on a few things like boxing out and rebounding, but doesn't want to change much of what coach Smiley has done.

"I'm trying to build off what coach (Justine) Smiley has done, not trying to change too much, but use the experience and expertise that they have running her stuff and adding to it, and trying to make it even better if that's possible.

For the rest of the season, one of his ultimate goals is to, "get them to be better than they believe, and the sky's the limit from there," he said.

The Lady Rams are back in action against Rock Academy Wednesday Dec. 4, 3 p.m. at home.