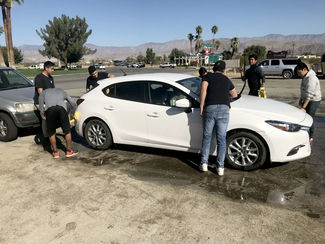 So you need 14 jackets for your high school boys soccer team members, each costing a discounted $30 each from Nike. What are you gonna do?

With the lack of an official car wash in Borrego, folks are always on the lookout for a chance to remove accumulated summer dust and grime from their cars, trucks, and SUV's; a shiny car shows up like some sort of a status symbol around here. Hey, sounds like car wash fundraiser time.

Borrego Springs High School soccer team coach Ricardo Fuentes purchased all the necessary supplies and pulled his players together on Saturday Nov. 16 outside of the Borrego Sun building for a wash, rinse, and chamois dry. The water and hoses were supplied courtesy of Sun publisher Patrick Meehan, and by 10 a.m. the line of cars was backed up around the south side of Christmas Circle.

Water sprayed and suds splashed, and in one instance no less than seven players were working on a single car, the occupants still inside. They made quick work of the job at hand and quickly moved on to the next car.

The Rams soccer team raised over $700, so after car wash expenses, the team jackets will soon be ordered and on their way to Borrego.

The Rams went 3 – 5 in Manzanita League play last year, but they have six seniors back for this season, plus two juniors and two starters among four freshmen.

"We do the work," Fuentes said. "So we should do pretty good this year." A win against either of these strong teams will reveal how much progress the team has made since last season.