Veterans Day at the Circle 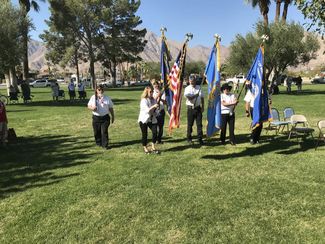 A squadron of black World War II pilots, who later came to be known as the Tuskegee Airmen, discriminated against both while fighting Germans and after the war, received their due recognition at the Veterans Day service at Christmas Circle in the form of a moving tribute by Robert Owen, a Marine veteran from Borrego Springs.

The ceremony began with a posting of the flags, followed by the Pledge of Allegiance, then a singing of the National Anthem, led by Judy Taylor on guitar. Larry Hoffer offered up the Chaplain's Prayer, followed by a welcome by American Legion Post 853 Post Commander Rick Dobbins to all of the nearly 100 attendees in the park.

In his remarks, Dobbins made special note of the passage of the Legion Act, Senate Bill 504, signed into law in July 30, which "opens the door for about six million veterans who can now access veterans programs and assistance for which they had previously been denied." This includes about 1,600 men and women killed, not in actual combat, but rather while on training exercises. Those who died in training while protecting our nation should, said Dobbins, have the same rights and privileges as those who were injured or died in combat-related situations.

Judy Taylor then got most of the crowd to sing along with "I'm Glad to Be An American." Legion Auxiliary President Karen Bowen offered up info on benefits of joining her organization, and Larry Bowen recited the poem, "I Am A Veteran."

But it was Robert Owen's remarks on the Tuskegee Airmen that highlighted the Veterans Day event. At the Palm Springs airport earlier this year, Owen met up with Lt. Colonel Robert Friend, a Tuskegee pilot, who posed with him and signed a picture.

Friend also regaled Owen with some the airmen's stories, but he died in June of this year. Owen recalled his memory of meeting with Friend.

The Tuskegee Airmen were an all-black squadron of fighter pilots who were discriminated against from the get-go. After every pilot scored 95 or better on an entrance exam, the commanding officer didn't believe they had the intelligence to pull off such a feat. He made them all take the test over again. Every man scored 100.

During their 117 missions, over German territory and under intense groundfire and from the Luftwaffe, the Tuskegee Airmen never lost a pilot, or even a plane. And they never lost a B-52 bomber under escort, either. It wasn't long before race discrimination gave way to the epiphany that white American pilots and crews were coming back alive after bombing missions escorted by the squadron of black pilots, and they were soon in high demand.

The ceremony wrapped up with a 21-gun salute, three shots each from the seven-member Legion team, and Taps closed it out.