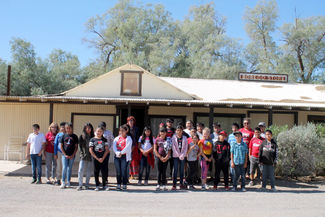 On Nov. 10, the Borrego Springs Civic Foundation sponsored an open house of the Old Borego Store and residence. The original buildings were built by Eslie Wynn in the late 20's, and the property was purchased by Ed and Glen DuVall in 1934.

Ed DuVall bought out his brother in 1936, and Glen moved to the San Diego area.

Ed and Alta DuVall were married in 1936, and adopted Denny DuVall in 1939 and Janet DuVall four years later. Ed ran the general store through the late 50's, closing it up in 1960.

The property was purchased by Fleetwood Garner in the late '80's and remains in his family today.

Every year, the Borrego Springs Elementary School fifth grade class meets at Old Borego before the opening. The class writes up history papers on Old Borego, and the Civic Foundation awards a $50 prize to the first, second, and third place winners. First place this year was Judith Fregoso, second place was Fernanda Villa Jana, and third place Gorge Torres-Anas.

This year's event had over 50people in attendance, and of course "Henry the Truck" was there along with me helping giving tours through the old house I got to grow up in from 1939 to my marriage in 1961.

This is a fun annual event that if you haven't ever attended, you should.