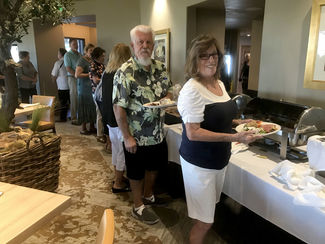 U.S. Marines are all about tradition. From their inception in 1775 up until today, Nov. 10, 2019, they have gathered and proudly remembered for 244 years.

This year's event was held at Rams Hill, and after folks had time to chat and settle in over wine, beer, or soda, it included a fabulous prime rib dinner with all the fixings, with no one leaving hungry, overseen by Executive Chef Dennis O'Leary, 30 years in the restaurant business and in his first Season here in Borrego; look for a profile on O'Leary and soon-to-be wife Kim in an upcoming issue of the Sun.

American Legion Post 853 Commander Rick Dobbins served as emcee, and chaplain Larry Hofert began with the invocation. After the meal, Hofert spoke again of Marine tradition, "Once a Marine, always a Marine," followed by a video of the traditional reading of the 13th Marine Commandant John LeJeune's 1921 inspirational letter to the troops.

The video including historic footage of Marines in action and during peace time. A second and cinematically compelling video followed, using a montage of images and dialogue capturing what the Marines are all about – brotherhood and tradition.

The traditional cake-cutting ceremony featured Roger Reis and a Marine sword, with slices tasted first by the oldest Marine present, Don Shindler, a WWII vet at 93 who was sent into action following the dropping of the two atomic bombs on Japan in 1945, followed by Sam Pacheco, a relative babe-in-arms at 46.

The late Ray Bolano played his trumpet every day up until his passing in November 2016, and his final trumpet rendition of Taps was captured on audio and played to the audience, an emotional moment for all.

While every Marine birthday event is pretty much the same in terms of structure, it's still heartening to see the unique tradition unfold year after year.