Halloween at The Mall 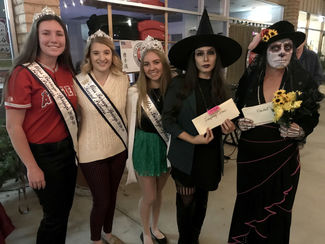 The Borrego tradition of kids and adults dressing up in wild and innovative costumes was alive and well on Halloween at The Mall.

At The Mall, there was definitely a lack of Samhainophobia (fear of Halloween). Smiles were bright and cheerful all around from our newly crowned Miss Borrego 2019 – 20 Danielle Del Bono, First Princess and Miss Congeniality Delaney Barclay, and Second Princess McKinley Parker. Parker presided over the awards for best costume in several age categories.

The contest wasn't, however, for a reward of "treats," but rather for showing off to parents, friends, and onlookers. Oh, and being selected by public opinion in the form of clapping and screaming support for best costume in a given category or age group.

In the adult categories, Brianna won for Best Costume with her witch outfit, and an otherwise unrecognizable Micki bested the Scariest Costume field as a ghoul.

Ivana as an Egyptian princess won Best Costume for the younger kids, and Lyla won for older kids. The joy of showing off and competing was apparent with mom Cecilia and her two kids, William and Allyson.

Aaron and Roselynn didn't win anything, but his Swat Team outfit and her stunning checkered costume are surely worthy of notice.

And last but certainly not least were the Pirates of the Salton Sea, fresh off their memorable contribution to the Borrego Days Parade antics and later at their compound at Christmas Circle during the Festival.

It was all fun at The Mall, and we're looking forward to new and dramatic costuming next year.