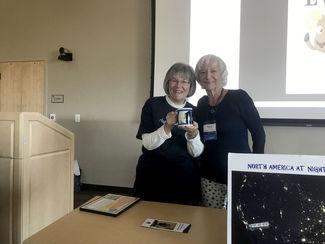 Night. The absence of sunlight. It takes up about half of our 24-hour day, and hence half of our lives. Not only great a time for viewing the wonders of Borrego skies, designated 10 years ago as one of only two International Dark Sky Communities in the world, but nighttime conditions are also a biological imperative for humans, animals, and plants everywhere else.

That's one of the fascinating takeaways from the 10th anniversary presentations to as many as 100 attendees throughout the afternoon on Saturday Nov. 23 at the Library, sponsored by our Dark Sky Coalition (DSC), chaired by Betsy Knaak.

The events began at noon with DSC's Jim Rickard showing folks the Sun through a filtered telescope. Because the Sun is in a period of relative quiescence during its 11- and 22-year sunspot cycles, there were no sunspots to see. Rickard explained to one viewer that sunspots come in pairs, positively and negatively charged, and that they form at the Sun's equator and migrate north and south, combining to form areas of high electromagnetic flux. So much so that because the Sun's equator rotates faster than the poles, places within the interior are twisted into knots, eventually breaking the surface with the paired sunspots.

At their peak number and concentration, sunspots send out charged particles that intensify the Auroras over both our North and South Poles. The next peak in sunspot activity will be centered around the year 2024.

By far the most fascinating slide and oral presentation was from Megan Peralta from the Julian Dark Sky Network. They, too, are working on Dark Sky Designation. Her presentation revealed the importance to all living things of a diurnal life, that is, spending time in the light and in the dark: We all need darkness as much as we need sunshine.

Peralta displayed a notable photograph of a tree during what was presumably late-Autumn. The deciduous tree was mostly barren of leaves, except for the side facing a powerful streetlight; it still had its leaves. The tree was essentially fooled into "thinking" it was not yet ready to shed its foliage, at least on that one side. One example of many biological processes interrupted by artificial light.

Melatonin is a naturally generated hormone that regulates the sleep-awake cycle, suppressed when awake and activated when asleep. It's also an antioxidant, anti-depressant, and an anti-aging compound. And like the leaves of the aforementioned tree, human/animal brain activity can also be fooled when lighting is present when it shouldn't be. Humans, animals, and plants all need the dark, said Peralta, and constant bright lighting can and does have negative impacts on them all.

Janice Bina-Smith and Ken Wright performed two musical selections on acoustic guitars, "When Fire Falls From the Sky," a song inspired by a night on Volcan Mountain, and "Borrego Nights," a piece done in soft harmony. One could feel the warm evening and all but touch the stars in the "pitch-black desert skies."

Flagstaff, Arizona was the first city to acquire Dark Sky Community status, resulting from community involvement centered around the Lowell Observatory. Grace Rickard showed slides revealing that by setting up concentric rings/zones of lighting maximums, the observatory has been able to function as an important scientific tool in astronomical research.

In Borrego, efforts that have proven successful in maintaining dark sky status include informing local government, businesses, and residents about the problems associated with up-lighting, glare, and over-wattage, and then encouraging the use of available technology to solve the problems. DSC's Dorothy Hoogan and Eli Hanks presented options such as fully shielded lights, red or amber colored lights, and even lower wattage bulbs which are all available locally and which go towards our goal of dark skies.

And Betsy Knaak noted work being done by Jim Wermers, owner of both the Mall and the Village Center, on reducing lighting impacts, as well as fire department and Wells-Fargo efforts to shield external lighting. She also stressed the importance of how DSC activities and promotions "do not require money" from outside sources.

Single family home residents also have a role to play in preventing unwanted light "splattering everywhere, including onto your lawn and in through your windows," according to a DSC info sheet. But it's a sensitive issue, as most folks want to be neighborly, so long as they get their safety and security. And most of the folks who are victims of "light trespass" don't want to be confrontational, especially at those who don't understand the problem and would probably listen to and agree with simple solutions to mitigate the nuisance if presented in the right way.

Via tact and friendliness, the importance of presenting energy/cost savings, info on lighting ordinances, and alternative lighting designs/costs in a non-adversarial atmosphere cannot be overstated. A shared bottle of wine, or perhaps a spot of tea, might be the appropriate conversation starters.

There was also the showing of the 2011 film, "Explore the Night," by Korean Public Television, and Font's Point was a featured location. It was very much in line with Megan Peralta's earlier presentation. A persistent theme of the film, much of it shot in Korea, was captured in a quote by the narrator regarding a select few who appreciate the dark and its calming influences. "They turn off the lights to appreciate the nights."

Bustling cities and their bright lights in Korea, and presumably in many other cities, together with reliance on night shifts for factory workers, are said in the film to be responsible for employee fatigue and a decrease in productivity. Such a shift in sleep cycles seems to have decidedly negative impacts on our interaction with others and our own sense of tranquility, disrupted by disorientations in time and place caused by too much light and not enough dark.

That night, dark sky enthusiasts that included locals and travelers from San Diego converged outside Lutheran church for telescope viewing, hosted by Jim and Grace Rickard. The skies were partly cloudy, less than ideal, but there were 4-inch, 5-inch, and 6-inch telescopes available for the rather sizeable crowd of about 70. They were able to catch Saturn, the Andromeda galaxy, and even the dynamic Orion Nebula.

A number of visitors brought sleeping bags and stayed long after the program ended, and those who drove from San Diego stayed long just enough to catch our dark sky wonders, then drove all the way back.

Congrats to DSC members for providing an enlightening and educational experience to Borregans, as well as for 10 years of dark skies overhead.