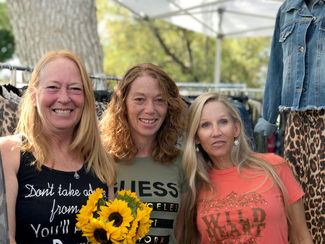 It's a rather touching although complicated tale, best appreciated when considering the time it took to unlock the tri-fold secrets, the cross-country distances involved, and efforts expended to unite three half-sisters who, until just a few months ago, had never all been together at the same time. It took Brandi, the youngest, her whole life to discover anything about her father, or that she had two older half-sisters. When they all finally met up in San Diego this past September, it was a joyous union. And the two younger sisters came to Borrego where this reporter discovered them together at the Sundowner at Pablito's on Nov. 15. Their paths to get here were indeed twisted ones.

The eldest is 58-year old Borregan Diana-Lynn, in the middle is 51-year old Anna Marie living in New Jersey, and the youngest, Brandi-Lynn, is 47 years old and lives in Florida. All three had the same father, Bob Ely (pron Ee-lee), a tough-minded military man who never really learned how to be a father, never mind a good one.

Bob Ely got in trouble in his late-teens and had the choice of going to jail or signing up for military duty. He chose the U.S. Navy and got stationed in San Diego. That's where he met Diana's mom. She got pregnant, they got married, and Diana was born in 1961.

Bob's relationship with Diana's mom "didn't work out," she said, and he went to Vietnam in 1964, essentially abandoning his new family. But he wasn't done siring children. He came back to Norfolk, Virginia where he hooked up with his childhood sweetheart, Anna Marie's mother, and she was born in 1972. Bob retired in 1976 after 20 years' honorable service, and he died in 2003 from stomach cancer, probably related to his earlier exposure to Agent Orange as a Vietnam-based River Rat (river patrol boats).

In 1989, Diana located her dad, mailed him a letter, and when he showed up, he told Diana that she had a half-sister, Anna Marie. She was shocked. They both attended 17-year old Anna-Marie's high school graduation. "It was like we'd known each other our whole lives," Diana said.

Anna Marie's mother wanted her to know her family, and it was in a letter from Brandi's mother that the two older girls first learned they had a third half-sister. While her mom knew about Diana and Anna Marie, Brandi was told nothing, and she never met her father.

And so began the many years of intermittent searching, culminating with Brandi's mother's death, before Anna Marie once again poured over the files to try and make the right connections. Using her background as a paralegal, Anna Marie researched letters and backtracked to locate Brandi. There was a sense of urgency to contact Brandi because Anna Marie had discovered from her father that, like him, she suffered from epilepsy, dangerous because it came late in life and was active only at night. Like when she was sleeping. Her condition was discovered early and controlled by medication, but she needed to get word to Brandi about what could be a surprise condition coming on later in her life.

Diana also searched names on Facebook, found Brandi, and sent a cryptic messenger notification on Sept. 6 asking Brandi to contact her, giving her some basic info on the situation in what seemed to her a probable relationship.

Full article in the Nov. 28 issue of the Borrego Sun.