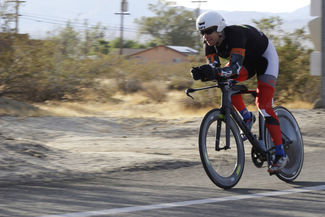 There were 267 participants from 18 countries, competing in seven age-group categories within seven event categories.

The time trials are qualifying events for the Race Across America this summer when riders come through the first timing station here in Borrego Springs.

"Last year I had no expectations," she said. "This year, I wanted to beat my previous mileage. I brought my A-game. I bought a time-trial bike and I had a great support crew, and they were a little more experienced."

Hackinen was also "Ms. Consistency" around the course, both in lap times and most of her pit stops. For her, she said race tactics and even what she ate before and during the event were all figured out precisely in prep beforehand. And she stuck to the script. She rode 37 more miles (a tad more than two laps) than Christie Tracy, averaging 19.3 mph.

Given Hackinen's average speed of 19.3 mph, close to the 20 that Tracy targeted, and about two laps (and two hours) difference between the two, the mind reels at what could have been one of the most exciting and closest finishes, ever, in women's time trial events.

Hackinen also had the fastest solo time, and was followed by USA's Tracy, and UK's Crystal Spearman, respectively.

Tracy set a distance record for her 40 – 49 age category, despite an unfortunate incident on the track.

She won the 12-hour event in Borrego back in 2017, and was coming off a huge win at the Tejas 500-miler, a 24-hr event in Glenrose, Texas. She was feeling great despite a shoulder injury, and even a scraped knee resulting from a spill a week earlier. But her 24-hr race strategy in Borrego was simple: "Be steady, ride my own race, and keep pit stops to around a minute thirty seconds."

She also had a target average speed in mind of 20 mph for the race, meaning she had to average 53-minute circuits, plus pit stops, around the 18-mile course for around 460 miles. Helping Tracy to do that was her Servillo P3 racing bike that costs about $6,000, plus another $4,000 just for the wheels.

Tracy's 24-hour race began late afternoon at 5 p.m. on Friday Nov. 1. Besides being in the next older age group than her two closest competitors, she was on target on all of her race tactics – projected lap times and pit stops. It was around 3 a.m. on that same moonless night when she started to feel the cold, as did other riders. Certain areas of the northern part of the course had pockets of near-freezing air overnight, and Tracy's hands and feet were starting to go a bit numb.

However, instead of stopping to change into a warmer outfit, Tracy decided to power through. This reporter showed up in the pit area around 5 a.m. just as she was coming in for a pit stop. Her husband/crew chief Jamie assisted her off her bike, it was clear she was suffering. Turns out it was from hypothermia caused by wind chill while riding at 18+ mph.

Hypothermia is a very dangerous condition. Blood circulation in the extremities begins to shut down and transfer to the center of the body. Hands and feet go numb, then legs and arms. In Tracy's case, that slightly injured knee was also bothering her. She immediately went into her trailer with Jamie and they turned on the heater/blower.

According to the automatic digital counters, almost exactly two hours later (a lifetime in the world of competitive cycling), Tracy was back on the course. She had just lost two laps in distance and two hours in time, and instead of being ahead of Hackinen, was now behind.

After cycling 423.6 miles, Tracy finished second behind Hackinen's 460.8 miles, and it was "woulda-coulda-shoulda" about Tracy's fateful decision not to spend five minutes or so changing into warmer clothes when she first started to feel the cold.

For the men's, Andy Jackson, top-ranked in time trial events, and second ranked Michael Broadwith, both in their 40s, helped maintain the English tradition of cycling excellence. They both gutted out over 500 miles each during the 24-hour Men's Solo event, with daytime temps in the 70's and a moonless night, but where the temp dropped overnight in cold spots north of Christmas Circle to near-freezing.

Category winners, with their age group, mileage, and average speed as follows:

It was another great cycling event in Borrego, and we congratulate all the participants, and especially the medalists, who gave it their all for 6, 12, and 24 hours.

Full article in the Nov. 14 issue of the Borrego Sun.