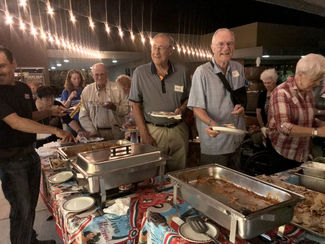 Many came to win the fudge, but only one was chosen. On an evening in The Center Courtyard at the second Sundowner of the year, sponsored by the Chamber of Commerce, began with a comfortable temperature, which got cooler as the evening wore on. More than 60 guests showed up at Pablito's Nov. 15, first for happy hour with red and white wine offerings, beer, margaritas, and then a fine Mexican dinner of taquitos with sauce, rice and beans, and nachos.

Chamber member and Sundowner Emcee Brad Tidwell introduced our new Miss Borrego 2019 – 20 Danielle Del Bono, and Second Princess McKinley Parker, who both assisted during the raffle of items including the aforementioned fudge.

Fred Jee announced the pending ticket sale for our Film Festival starting at midnight on Dec. 15, available only online at BorregoSpringsFilmFestival.org. The Festival runs Jan. 16 – 20, 2020. There were 70 films presented last year, with a whopping 517 film submissions this year. Jee and his team are preparing for another well-attended Festival. All-Event passes, including opening Gala and concluding Awards Banquet, are $135, or folks can purchase a block of films for $10 each. A special live music performance of "The Passion of Joan of Arc" will be presented on Jan. 15. So go online now and check out the lineup of fine films and their showing dates at BSPAC.

Sun Publisher Patrick Meehan gave his latest estimate for the opening of his new restaurant at the airport, The Propeller. "Several weeks" was the best we could get, but he did expound on the unique menu in store for all (Beluga caviar, anyone?), with only one main course offering that is different each day. Chef Jeremy may be one of the guest chefs. Meehan won a floral photograph in the raffle and says it will be on prominent display when The Propeller opens.

Lee Chelgren was happy to win the assortment of items made by Borrego's local artisans – a basket, scarf, medallion, etc. – from The Chief, owned by Diana Fox.

And finally, there was 96-year old artist Hal Hawkins, sitting in his wheelchair in his Center Courtyard store/gallery, describing his late-70's painting of and association with astronaut John Glenn. They were old friends, including Glenn being a pitcher to Hawkins' catcher in times long ago. Hawkins was also an executive working for Howard Hughes, a photo of the Spruce Goose on prominent display. In his store was some pretty amazing artwork from a man of any age, but Hawkins, like the Energizer bunny, keeps going and going.

Oh, and Liesel Paris won the fudge, her obviously forced smile as counterpoint to elegance captured forever by a guy who has spent more money on raffle tickets going into the fudge cup than he cares to admit.