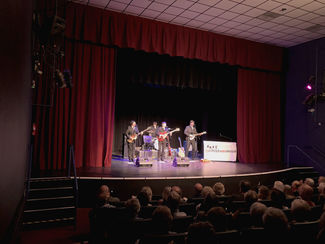 On my visit to Borrego from the UK, I was told by the editor of the Borrego Sun that they were having a Brit night at the Borrego Springs Performing Arts Center, and knowing that I was a part-time reporter said, "If you are going, you can cover the story for the Sun and take a few pics, as our reporter can't make it."

So off I went to the gala reception, where the place was packed with theater goers drinking champagne and enjoying the canopies that were being served.

There seemed to have been a problem with the issuing of tickets, so extra seats were placed in the auditorium, and the problem was solved. There were still some people outside trying to get tickets, but the show was sold out, with many people turned away. It seemed that most of Borrego wanted to see the Beatles band.

The audience was welcomed to the start of the BSPAC season by Fred Jee, then followed by Richard Helving, President of the BSPAC board, who said a few words of welcome for the first show of the season. He also explained the ticket glitch.

The show opened with a montage of 60's TV ads, then went to the Ed Sullivan show, where he introduced the Beatles; low and behold, the curtain went up, and there were the Beatles singing, "All My Loving." The crowd loved it.

They then continued to play through their repertoire of songs, with the audience particular enjoying, "She Loves You." There was also another montage.

The second half continued with two more montages, and of course, more Beatles songs.

There were sound and technical difficulties, but the crowd enjoyed it anyway.

A great start to their theatrical season and a great night for all to remember.