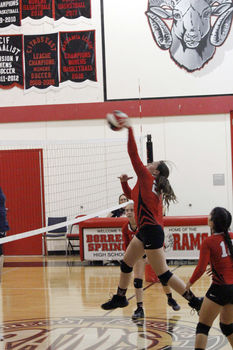 Despite hard hits and good rallies by the Lady Rams, it seemed that the Lady Scots of Vincent Memorial had better control all over the court.

It was a rough couple of sets for the Lady Rams who could not comeback with the force the Lady Scots showed at the net.

The team were on the road for back-to-back games, facing crosstown rival Julian and Calipatria.

The team also faced the West Shores Wildcats, which took place after print.

It was a rough first set against Vincent Memorial for the Lady Rams as the control of the ball was not going the way they wanted it to, and the little miscues were taken advantage of by the Lady Scots, as they found themselves down 5 – 0.

A kill by freshman Jimena Ochoa put Borrego on the board, to stop the rally, 5 – 1.

The Lady Rams were chipping away, down by five, 9 – 4, after a save at the net by senior Delaney Barclay and ace by Ochoa.

The set broke open for the Lady Scots, who continued with a dominant performance. Despite the hard hits by the Lady Rams, they were countered right back against them, and the lead was something they could not come back from, and dropped the set, 25 – 7. The second set was a bit better for the Lady Rams who found some rhythm and momentum to build off of.

The Lady Rams trailed 6 – 2, after a kill by junior Yessenia Marin.

The team was slowly chipping away, and taking advantage of the errors by the Lady Scots. The momentum began to build with the score so close, after a tip by Barclay that was blocked, but was eventually saved going the way of the Lady Rams, 9 – 7.

The Lady Scots, however, were able to keep the lead, despite a solid kill down the middle by sophomore Brianna Del Bono.

The Lady Rams had nice hard hits, but were not controlled enough to stay in bounds, and were countered back.

Barclay was a force at the net, going up and high for the attempted kill, but was hit right back each time.

However, down the middle, Barclay got the upper-hand and finally got it, but the Lady Rams still trailed, 20 – 15.

The Lady Rams scored four unanswered points to be within one, after aces by Marin, a kill by Barclay, and nice saves, 20 – 19.

Both teams went back-and-forth to stay within one of each other.

Brianna Del Bono found the right spot at the net to get the kill to tie the game up at 22.

It sure was a battle by both teams, fighting to take the lead and the set, but was eventually won by the Lady Scots, 25 – 23.

In the third set, attempting to avoid the sweep, the Lady Rams were falling early.

Despite good hits and saves at the net by the Lady Rams, the control of the ball by the Lady Scots were just a bit better.

The team could not get a handle or rhythm going, and the sweep was complete, 25 – 6.

Despite the deficits the Lady Rams faced in the game, they had positive hits and communications, even though it did not go their way as many times as they wanted it to.

The Lady Rams are back in action against Hamilton Thursday Oct. 17, following the JV game, which begins at 4 p.m.