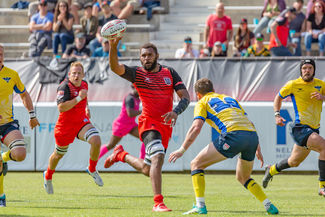 With the recent departure of the beloved San Diego Chargers NFL franchise, San Diegans who love American football are searching to fill that gritty, adrenaline loaded void. Some citizens have embraced SDSU's collegiate football program or the short-lived AAF San Diego Fleet. But for those yearning for more excitement to permanently fill that void, there is a wonderful solution already situated here in San Diego.

American Football is actually the child of the older sport known as Rugby Football that is played and cherished globally. Rugby Football was created from Football or as we refer to it in North America, "Soccer."

Rugby started, according to legend, when an English schoolboy named William Webb Ellis, in 1823, picked up the ball during a soccer match and ran with it. He attended a school aptly named Rugby. Rugby School is a day and mostly boarding co-educational independent school in Rugby, Warwickshire, England. Founded in 1567 as a free grammar school for local boys, it is one of the oldest independent schools in Britain. In 1845, a committee of Rugby schoolboys wrote the "Laws of Football as Played At Rugby School", the first published set of laws for any code of football. The school embraced the sport still known as Rugby Football and created the laws, most of which still dictate how the game is played around the world today.

Walter Camp created American Football as a derivative from Rugby. The most significant change from rugby to football was the introduction of "blocking." The first U.S. intercollegiate American football game was played between Princeton and Rutgers in 1869.

Despite the national mania for college and NFL Football, the United States is one of 101 countries that plays Rugby Football. Our men's national rugby team is currently ranked 12th in the world (Mexico is currently 44th and Canada 22nd) and this month will be playing in the 2019 Rugby World Cup (RWC) in Japan. (NBC Sports Network/NBCSports Gold) Our women's national Rugby team is ranked 5th in the world. Both the men's and women's USA Rugby teams are known as the USA Eagles.

So why is Rugby a quality option to fill that Charger void? Two reasons: time spent and culture.

Time spent is easy, it takes roughly 3.5 hours (210 minutes) to play a 60-minute game in American Football. This is due to the fact that in football an average play is 6 – 8 seconds followed by a wasted interval of 35 seconds setting up the next play. In contrast, Rugby is an 80-minute contest completed in two hours. Rugby does not have a play clock because rugby is one huge free flowing continuous play under a 40-minute running clock, similar to soccer.

The culture is the largest difference between Rugby and other sports and is the most important attraction. Stacy Paetz, CBS Sports, wrote a wonderful article on the MLR website about her introduction to Rugby in the USA. It is a fascinating read, especially when you understand her background with covering mega-buck sports like the NBA.

"My first match in San Diego was beyond exciting. Not because I saw my first rugby hat-trick, or witnessed my first drop goal, or the fact that the home team came back to win in full time. No, what I took away was how the sport of rugby is more than a game – it's a culture. Integrity, passion, solidarity, discipline, and respect are the defining characteristics of rugby. This unique character of sport is maintained both on and off the field. It's not uncommon to see team captains and other prominent players working with young people on the pitch on game day. Yes, on game day. Your culture is not what you occasionally say, it's what you consistently do."

The San Diego Legion live that culture. You too can bring it into your lives via television or streaming and your consciousness via engaging your communities with rugby and spreading with the values we would all like to have embedded in our neighborhoods.

Borrego Days are upon us. I don't know the history of professional sports teams that have taken an interest in our Desert Festival but this year our new friends, the San Diego Legion, are going to march in our parade and display in Christmas Circle. Borrego locals and visitors can meet and talk to players who played in the "Superbowl" of rugby last season against Seattle. So not only are the San Diego Legion stars excited to get to know us, they are also very, very good!

In 2020 the MLR expands again to 12 teams in the USA and Canada. San Diego Legion look well-positioned to challenge for the "Shield" once again.

So when you bump into a large athlete during Borrego Days wearing red and black, don't be surprised when they shake your hand, look you in the eye, engage you in conversation and then refer to you as Sir or Ma'am. It's just part of the rugby culture.