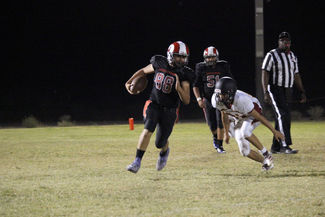 It was not exactly the ending expected for the last game of the regular season, but the hard work put in by our Borrego Springs Rams football team was surely shown through it all.

Their first year in the Ocean League after coming off a stellar undefeated season in the Citrus League, was certainly a challenge. Head coach Tim White knew that it was going to be a tough one to graduating

nine of their 17 seniors on the team who contributed across the board.

"Coming off the success we had at 9 – 1 last season, and you graduate that kind of talent, it's tough to replace," he said.

Yes, the expectations were high this season, but even with the score not showing it, they fought through adversity and fought for each other every minute of the game.

On Oct. 25, the Royal Knights of Calvary Christian spoiled the Rams homecoming game, 28 – 8.

"Despite what it says on the scoreboard, I'm super proud of the way that the young kids stepped up this year, and with four seniors, they battled their hearts out. I am proud of their efforts for sure," Tim White said. "They're just warriors. Theyplayed beat up, injured and hurt in some cases, all year long and they

A short shuffle pass for a run down the middle put the Royal Knights on the board first, and after a failed two-point conversion, led the Rams 6 – 0.

The Rams attempted to answer right back with consistent pushes down the middle for positive yardage. However, the Royal Knights defense stepped it up, containing the backfield. After the first quarter, the Rams were down 6 – 0. With 8:29 in the second quarter, the Royal Knights were about to but the pass was intercepted by sophomore defensive back and running back Even Padilla.

However, once again, the Rams

were swarmed by the Calvary

Christian defense, and unable to

convert the opportunity into a score

and linebacker, and Octavio

back were up and at the Royal

After suffering a wrist injury, Ty White was out of the game and did not return. Senior tight end and defensive lineman Andres Reyes stepped up in his place, and continued to surge forward down the middle for the first down. But the Rams could not get on the board, and entered halftime, down 6 – 0.

Depending on the nature of the injury, Ty White could be out four to six weeks.

"It's tough because he's looking forward to carrying what he does on the basketball court, that's gonna probably affect his basketball season," Tim White said.

During halftime, the homecoming court was announced.

Full article in the Oct. 31 issue of the Borrego Sun.