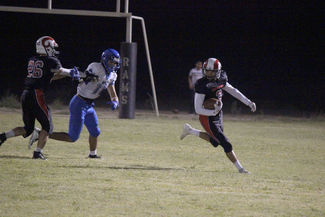 The Borrego Springs Rams football team hoped to make a statement against one of the top two teams in the Ocean League, the San Pasqual Dragons.

Entering the night's matchup, the Dragons sit just under Foothills in League standings.

The Rams, on the other hand, hoped to extend their win streak to two, after shutting out crosstown rival the Julian Eagles on their homecoming night, 48 – 0, Oct. 4.

However, it seemed the Dragons knew the right places to punch their way through to the end zone, capitalizing on their speed and the open gaps of the line. The Rams could not contain the Dragons, who defeated the team, Oct. 11 on senior night, 74 – 29, as they extended their undefeated streak on the season.

"You gotta give credit to that team. They're tough as nails and their kids brought it tonight. For 11 kids on their sidelines, super proud of the effort they put out, and they deserved to go 6 – 0 on us tonight," head coach Tim White said.

"I'm so proud of our kids, they rose above and walked away from some super tough situations when it was getting a little chippy and still, they showed their sportsmanship, and their heart. They got banged up and just kept getting back up and going back out there and giving it their all. I just wish the outcome could have been different tonight for our seniors, but we'll rebound, have a good week of practice, some rest this weekend and get ready for Victory Christian."

The previous time these two teams met was last year in August, just the second game of the season, the Rams defeated the Dragons in a shut out with a score of 24 – 0. Clearly, it was a different story this time around.

The Dragons were on the board first early in the game with a rushing touchdown from midfield. The two-point conversion was no good, as they led, 6 – 0.

Back-to-back fumble recoveries for both teams seemed as if it was a game of hot potato, until the Dragons managed to turn one into a touchdown, and led 14 – 0 on the Rams after a completed two-point conversion.

Despite the Rams efforts to get the ball across the field, the Dragons defensive line stopped them every time, proving to be a force.

The Dragons scored another touchdown to begin the second quarter, as the Rams looked to be down 22 – 0.

The momentum began to shift in the way of the Rams, after a big pass completion from senior quarterback and linebacker Ty White, who broke through two tackles to get the ball out to senior tight end and defensive lineman Andres Reyes for 68-yards.

The Rams began to chip away, and once again, Reyes was open for the catch for a 43-yard gain. Then a quarterback keeper down the middle, followed by a misplayed kick turned to a two-point conversion, 22 – 13.

The Dragons quickly answered back to extend their lead, but the Rams found a way to get back in it.

Junior Gabe Milyard returned the kick off return for an 80-yard touchdown, and the two-point conversion was good, 30 – 21, still anyone's game.

With 45 seconds left in the first half, the Dragons managed to get one more touchdown and two-point conversion on the board, and led 38 – 21.

"They're a great group of kids, top notch. Coach Thompson said he would go to war with them and he has been through the worst of it, and I would to," Tim White said. "They're great kids number one, and they shined even though the score board didn't show it, but I'm super proud to be their coach."

The third quarter was a rough one for the Rams, as the game began to slip away with no turning back.

The Dragons managed to score two touchdowns and were able to convert just one two-point conversion, and led 52 – 21.

With 1:20 on the clock left in the third quarter, sophomore running back Even Padilla broke through the middle for 38-yards to score a touchdown. The Rams converted the two-point conversion, 52 – 29.

The Dragons managed to score once more in the third and twice in the fourth, as they closed it out, 74 – 29.

With a couple of games left before the close of the regular season, Tim White said tonight's matchup was a "do-or-die" in terms of getting into playoffs.

"I really felt like we needed to beat this team tonight in order to get in. They still have Foothills and the Rock, our other two losses in league so tonight was a critical win for them and unfortunately it was a pretty tough loss for us in terms of playoffs," he said.

The Rams will face off against Victory Christian Academy in an early 3:30 p.m. game Friday Oct. 18.

Then the team will return back home for their homecoming game to face Calvary Christian Academy Friday Oct. 25, 7 p.m.