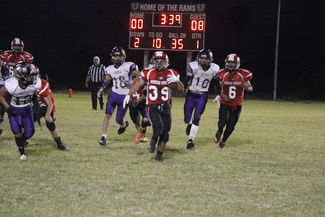 Senior running back and linebacker Octavio Delgado breaks past the Foothills Christian defense for the first down.

The Borrego Springs High School Rams football team had high hopes in facing the Foothills Christian Knights this season, after a rough go-around the last time these two teams faced off.

As many remember, the Knights took out the Rams last season in the first round of the CIF San Diego Section Division IV 8-Man Championship, 46 – 8 at Junior Seau Sports Complex.

However, in hopes of the different outcome, and a good start to the game, the Rams could not hold the Knights back, and saw a similar score of 60 – 8, Sept. 20.

Despite how the score looked, the Rams did not let that defeat them, and continued to work hard until that clock ran to 0:00 in the fourth quarter.

"We came in knowing it was going to be tough one, looking across the sidelines and you see they got twice as many kids as you, they're bigger, faster, stronger," head coach Tim White said. "But our kids, I'm so proud of them. They never gave up, even when Ty (White) went down with a knee injury, they dug deep, got that last touchdown. I couldn't be more proud of the way we played, and the way we finished that game.

This was the Rams' first Ocean League loss of the season.

The team hoped to bounce back from the tough loss, as they traveled to face Rock Academy. The Rams could not come back, and lost, 69 – 38.

Heading in to face Rock Academy, Tim White knew it would be another tough challenge, and thankfully, had his quarterback back for the game, senior Ty White, who suffered an injury in the game against Foothills.

On the Rams first possession against the Knights of Foothills Christian, it was a push-by-push effort to gain yardage. Literally. It seemed like a new strategy to run the ball past a strong Foothills defense.

Senior defensive lineman and tight end, also quarterback for the night, Andres Reyes carried the ball down the middle, with the rest of the Rams offense pushing him forward.

That worked for a bit, until the Rams were unable to get enough push for the first down.

With 4:22 on the clock, the Knights seemed to find the end zone on a 40-yard carry, breaking through the Rams defense. A two-point conversion was good, 8 – 0.

The Rams attempted to answer back, after a big run by senior running back and linebacker Octavio Delgado for 31 yard for the first down. However, despite these efforts, they could not get to the end zone.

Foothills managed to get past the Borrego defense on sweeps for big first down runs on consecutive plays. In the second quarter, the Knights scored twice in five minutes with two good two-point conversions, as they led 24 – 0.

With 3:34 left in the second, the Knights' quarterback had a lot of time in the pocket to decide a play, but he let it fling toward the end zone, where sophomore defensive back and running back Even Padilla made the grab for Borrego.

However, on a crucial fourth down with one-yard to go, the Rams were unable to convert that into a first down or touchdown.

The Knights managed to score one more time on a quarterback keeper before the end of the second quarter, and led 32 – 0 at the half.

Despite the score, White said his team did not give up and kept their heads up.

"We wanted to slow the game down, and we were gonna run "cheese" in honor of Bus (Lucas Morales) who came tonight and just try to eat up that clock, and long drives, and we came up short on that first cheese on that fourth down. It kind of hurt us a bit, and then had a couple of drops and missed reads, otherwise I think we would still be in that ball game in the first half. Unfortunately, things kind of steamed rolled toward the end of the second quarter, then got out of hand in the third," Tim White said.

The third quarter was rough for the Rams, as the Knights continued to put up points on the board, scoring four times, but only two out of four made two-point conversions. Two of the touchdowns came at the cost of an interception and a fumble, and were down, 60 – 0.

The whole fourth quarter was all Rams' offense, as the Knights only managed to get a hold of the ball in the last minute of the quarter. The team used multiple strategies to get down the field.

With 2:45 left in the game, a rushing touchdown by Reyes down the middle from the one-yard line and a two-point conversion put the Rams on the board, 60 – 8, avoiding the touchdown.

A long pass and good run by the Knights seemed that they would score once more before the game ended, but the defense didn't allow that on their watch, stopping them just inside the 10.

It was not exactly what the Rams had hoped for this time around, but it is still a long season to go.

"Just like every one, we're going to prepare to win, so we're gonna rest and recover this week, watch a bunch of film and get ready to go," Tim White said. "Like an eating elephant, one bite at a time. We'll take on the next opponent, and after that we'll gear up for the rest.

The Rams head up the hill to Julian, in hopes of spoiling their homecoming game, Oct. 4 with kickoff set at 7 p.m.