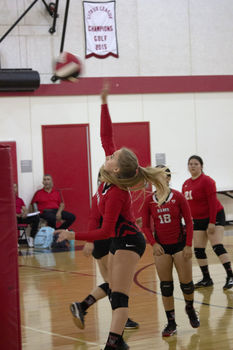 Senior Danielle Del Bono goes up and gets the kill against the Lady Wildcats.

The Borrego Springs varsity volleyball team was back at home Sept. 24 to face the Lady Wildcats of Warner Springs, looking to bounce back after being swept by West Shores, who sit on top of the Southern Manzanita Volleyball League standings.

This was their first league win of the season. The two teams faced off again at Warner, which took place after print.

The team also participated in the Mountain Fall Classic Sept. 28, held at Hamilton High School in Anza, where they finished 1 – 3.

In the first set of the game against Warner, Borrego took control early in the game.

Junior Marla Manzano started it off with consecutive aces, then was followed by a kill from freshman Jimena Ochoa to put the Lady Rams up 5 – 0.

The Lady Wildcats managed to answer back with aces of their own to cut the deficit, 5 – 3.

However, the Lady Rams didn't let that get to them, and continued to build their lead with aces by Ochoa and sophomore Brianna Del Bono, who is also continues to give solid performances at the net.

The Lady Rams found themselves up by 15, after a kill on the left side by junior Yessenia Marin, 20 – 5.

The Lady Wildcats attempted to chip away, finding a few weak spots to get right back into the game. It was not enough, and a block by Del Bono ended the set, 25 – 10.

The second set was similar to the first, with the Lady Rams up early, 3 – 1.

Both teams had strong rallies, but it all went the Lady Rams' way.

The momentum continued with an intense save by senior Danielle Del Bono, after going back-and-forth at the net. The team still led 9 – 3.

The Lady Wildcats were finding some rhythm, taking advantage of miscues by the Lady Rams, 17 – 10.

With continuous hits by the team, along with a kill by Brianna Del Bono, and aces by Manzano, ended any hopes of a comeback in the set, 25 – 12, Lady Rams.

In the third set, the Lady Wildcats managed to stop a hot streak by the Lady Rams, and tie the game.

Solid performances and communication by the Lady Rams helped them control the rallies in the set.

The Lady Rams ran away with the lead, started by back-to-back aces by senior Delaney Barclay.

The Lady Wildcats attempted a comeback, but it wasn't enough as the Lady Rams completed the sweep, 25 – 11.

Despite a dominant game, the Lady Rams do have a few things to work on. However, the hard work put in by the team together shows how dominant they can be.

The Lady Rams are back at home to face off against Vincent Memorial 5 p.m. Oct. 3. JV begins at 4 p.m.