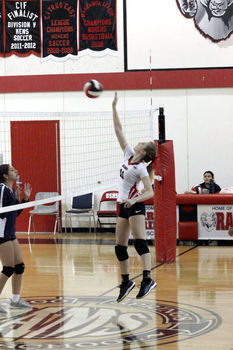 After a thrilling first set comeback, the Lady Rams continued to follow their momentum, taking the win against the Lady Scots of Vincent Memorial to remain undefeated on the season.

The Lady Rams kept the game close in the first set, trailing by as much as two, before getting their rhythm to take the first. They kept that going and won the second, completing the sweep for the win in the Manzanita League matchup Oct. 3.

The Lady Rams also faced Julian on the road, and swept them, 2 – 0, to stay undefeated on the season.

It was a back-and-forth start in the first set for the Lady Rams and Lady Scots, both taking advantage of all the little errors and miscues. However, the Lady Scots had the upper-hand, leading by one, 6 – 5.

Both teams had solid rallies, as the Lady Rams continued to chip away for the lead, but the Lady Scots quickly answered each time, and still led, 12 – 10.

Back-to-back aces by sophomore Isabel Arteaga tied the game at 12, but the Lady Scots took back the lead.

With much back-and-forth and the Lady Scots still in the lead, junior Danitza Mares at the net made good saves for the Lady Rams, to cut their deficit by one, 17 – 16.

It seemed that the Lady Scots were connecting with the ball, and controlling it the way they needed it to past the Lady Rams.

The game was getting closer after a kill by junior Celeste Fernandez, tied at 18.

Both teams kept the game close, but Arteaga helped the Lady Rams get the final two points to take the first set, 25 – 21.

The second set started better for the Lady Rams compared to the first with consecutive aces and kills by Arteaga, Mares and sophomore Angelina Sanchez to lead 4 – 1.

However, the Lady Scots took advantage of the miscommunications by Borrego, as they trailed by just one, 4 – 3.

The Lady Rams made quick adjustments to lead by three, 9 – 6, after a kill on the right side by sophomore (junior) Laurynn Strate. The Lady Scots continued their solid saves on many rallies, but could not get past the Lady Rams this time.

Both teams went back-and-forth, little mistakes on both sides, but the Lady Rams still led.

After a tip by juniors Jenny Sencion and a kill by Yudannia Ornelas, closed out the second set, 25 – 17, and the Lady Rams completed the sweep for the win.

Despite the little adjustments for the Lady Rams, it seems that they still have work to do to keep the momentum going as the season progresses.

The team is back in action on Thursday Oct. 17 against the Lady Bobcats of Hamilton. JV starts at 4 p.m., varsity is to follow.