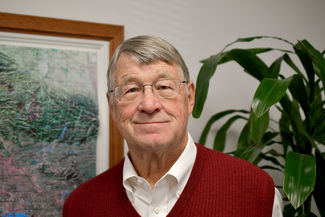 Tom Stemnock, part-time resident of Borrego Springs since 1986, passed away October 2, 2019 from kidney cancer. Tom is survived by his wife Christine of 47 years., son Jeffrey, daughter-in-law Ginger, his precious granddaughter Felix Anne-Marie and his sister Kathleen Brown of Virginia. Tom was predeceased by his stepson Philip.

Tom and Chris discovered Borrego Springs on their honeymoon and immediately fell in love with the beauty and peace of the desert. They visited the desert a couple of times a year and in 1986 purchased their first home. Since 1986, they spent the week working in Los Angeles and faithfully returning to Borrego on weekends.

Tom grew up in South Bend, Indiana, and received his BS from the University of Detroit Mercy and MS in Civil Engineering from Purdue University. Tom moved to Los Angeles, where he began his City of Los Angeles career with the Bureau of Engineering and in 1967 promoted to City Planning where he worked on the development of the City's General Plans. He was promoted to Deputy Advisory Agency and was responsible for approval of all subdivisions and parcel maps within the City and in 1977 he became an Associate Zoning Administrator responsible for approval/disapproval of variances and conditional uses for the City.

In 1978, Tom retired from the City and became a partner at ETI, a private land use consulting firm and civil engineering company. In 1994, he established Planning Associates, Inc., which provided professional land use consulting services, environmental planning, zoning entitlements for commercial, industrial and residential projects throughout the City of Los Angeles and civil engineering services. Throughout his 54 years in his profession, he enjoyed the challenges of his work and the many friendships. He continued to work full-time until his passing.

He served on numerous boards, committees and professional organizations including the American Society of Civil Engineers of which he was the recipient of the Harland Bartholomew Award presented to the Urban Planner of the Year. He was a member of the Institute of Transportation Engineers, the American Planning Associates, Lambda Alpha International, Chi Epsilon and a Board member of the Retired Los Angeles City Employees Association since 1996.

Tom had a deep commitment to serving the community, especially those in need. In 1982, he was a founding board member of Arroyo Vista Family Health Foundation which provides comprehensive health care to low-income families and the uninsured. Throughout his 37 years on the Board, he served as President, Vice President, Treasurer and Secretary as well as various committees. Arroyo Vista has grown from one clinic in the Northeast LA area serving 5,000 patients to four community health centers serving over 90,000. In 2016, he was the first honoree to receive the Arroyo Vista Compassionate Care Award.

In 2005, he joined Homes 4 Families Board (formerly Habitat for Humanity SF/SCV) which has built or renovated over 385 homes for low-income families and veterans. He served as Secretary and using his expertise served on the Construction and Acquisition Committees to help secure sites for the building of homes. He was honored at the 2018 Hearts for Heroes Builder's Ball for his contributions and commitment to Homes 4 Families.

He will always be remembered for his love of his family, a kind soul, an eternal optimist, a dear friend, mentor, Dodger fan and his love for the outdoors especially the desert.