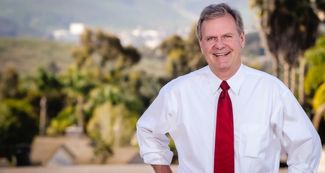 San Diego County District 5 Supervisor Jim Desmond will be riding in the parade of this year's Borrego Days Desert Festival, his first as our Grand Marshal.

As Grand Marshal, he'll be "honoring the contributions of Bill Wright to the Borrego Springs Community," who passed away Oct. 1.

Desmond added, "I look forward to being a part of Borrego Days. I enjoy visiting and representing Borrego Springs, and look forward to great things to come for this beautiful and unique community."

Desmond was sworn in as Supervisor in January, and is the successor of Bill Horn, who held the position for 24 years.

Desmond previously served as the Mayor of San Marcos from 2006 – 2014, where he has been a resident since 1992, and is the chair of the SANDAG Regional Transportation Committee. He is also a Board Member of the San Diego County Regional Airport Authority, and an active pilot for Delta airlines.

He and his wife Kerri of 32 years reside in North County, and have two grown children.

Desmond has been instrumental in pushing along toward realization what is known as the "Shadeway Project," a County-funded endeavor to connect Christmas Circle to the Mall and Library, spanning of about 0.21 miles.

Borrego Springs is just one of the few included in a list of new developments/projects, according to a press release on Aug. 26.

He says the County is currently reviewing project options for the Shadeway, to be erected along Sunset Drive between the Borrego Art Institute and the Library.

"Preliminary designs are underway," he said. "We should have options to bring to Borrego for public review in the 1st Quarter of 2020."

He also said that the construction and installation costs associated with each option will be included, based on design, materials selected, and whether it will be a continuous Shadeway or erected in separate sections. The cost of the project is still unknown, but has $650,000 funded for the Shadeway project," Miles Himmel, Communications Director for Desmond, said.