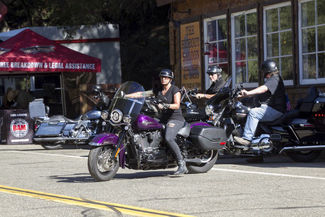 If it rained, the bar closed. That's because it was then purely a biker bar, and bikers either alone or en mass don't ride for recreation in the rain. And the place was not open on the weekend.

In mid-September, however, Josie's Hideout reopened as the newly remodeled Josie's Hideout Saloon that includes a restaurant. There is also a "grab and go" amenity, allowing for picking up pre-made sandwiches. The Hideout still services the scores of bikers who make it a must-stop destination just off Highway 76 near Lake Henshaw, but it's a bit more "upscale" now, catering to the non-biker crowds as well. It's open from 8 a.m. to 9 p.m. Wednesday through Sunday.

"It was a falling-apart dive bar," one patron said who spoke to the San Diego Union Tribune. "We like dive bars, but it was kind of a scary dive bar."

The Hideout is now owned by Mike Haaland of Rancho Bernardo, and his son-in-law Don Ammon is a limited partner in the business. The Hideout's former and beloved bartender, Sadie Stockalper, was murdered in 2015, and the Hideout closed shortly after. Ammon said a memorial will be held at the Hideout later this year.

There are also plans for expansion to service jeep and car clubs, according to Ammon, requiring a large parking area to accommodate bigger crowds and a 20-acre picnic ground for events. Twenty-two cabins on the 40-acre property are being renovated and will be available for rent in 2020.

"We know that motorcycles are still going to be our base," Ammon said. "We're getting the word out to travelers and it's working pretty well."