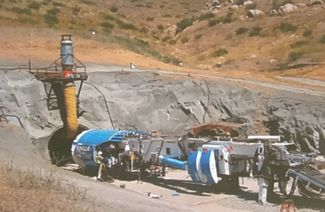 This article is for the little folks at Borrego Springs Elementary, because they are the ones who will see the results and reap the benefits. So kids, mark your calendars. Crayon is OK for now. But do have some erasers on hand for changes over the next 50 years. If all goes well, there may, and we repeat MAY be a water canal and an 8-ft. diameter pipeline, with a capacity of 280,000 acre-feet per year of potable water flowing through it. Some we can pump into our aquifer for storage purposes, and charge appropriately for it, and we'll probably be able to siphon off a few thousand acre-feet per year here and there for our own purposes.

The Pipeline is part of what is referred to as a Regional Conveyance System, part of it a lined canal and part an underground pipeline. It would run as a lined but open canal in uninhabited desert or rural locales but go underground near populated ones.

Decades from now, the Pipeline might become a fixture in Borrego that we old timers now offer as a down payment on a legacy to be appreciated later, during your own Golden Years.

As described during the Borrego Water District regular Board Meeting on Oct. 22 by Dan Denham, Assistant General Manager for the San Diego County Water Authority (SDCWA) and his aide, Kelly Rogers, the water transfer would begin at the San Vicente reservoir at the southern terminus of the Colorado River, 113 miles southeast of Borrego. Don't ask what year construction might start, because you don't have that many fingers. But it's planned to eventually run along our border with Mexico, then turn north just west of Mexicali.

Using gravity, water would flow "down grade" to the Salton Sea (still below sea level, we hope) and after filling up a few reservoirs and wildlife habitats along the route, run up through the Borrego Valley and along the southern outskirts of Borrego Springs to Hellhole Canyon.

The Pipeline then morphs into a 8-ft diameter tunnel (lined with concrete and steel or perhaps Unobtanium), running from the bottom of the San Jacinto Mountains to a facility north of San Marcos, less than 50 miles away as that crow flies. With Hell's Canyon somewhere near 700 feet above sea level to the San Marcos area (about the same elevation but over the mountains), the tunnel would be for all practical purposes horizontal. And what do they do with the ground-up rocks that are the tailings from tunnel drilling ops? Truck them over to the Salton Sea, and grind them into gravel to be used as ground cover over the ever-receding exposed playa. A two-fer.

It's a given that because you kids are still so young, you don't quite understand "big money." Imagine a football field stacked endzone to endzone and sideline-to-sideline with dollar bills in a pile about 10 feet high. Now multiply that by 26 football fields. We adults refer to that amount as "semi-big money" because it's only one billion dollars. But hey, a billion here, a billion there, and soon you're talking big money. The planners and builders would need big money, about $10 billion to complete the "Northern Route" project IF it goes through Borrego Springs and through the mountain.

There are also two other pipeline routes under consideration, a middle and southern route, so we can't pop champagne corks just yet. But we do have the ear of San Diego County District 5 Supervisor Jim Desmond, our 2019 Borrego Days Grand Marshal. Being a confirmed fiscal conservative, Desmond will therefore need to be shown hard numbers why Borrego should get the pipeline. The final go/no-go decision on alternative routes in the year 2035 may not even be his call, however, given that Desmond will be in his 80's if he's

still on the Board of Supervisors.

Full article in the Oct. 31 issue of the Borrego Sun.