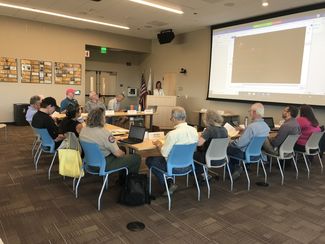 In a landmark meeting at the library on Oct. 4, members of the Borrego Springs Groundwater Sustainability Plan (GSP) Advisory Committee expressed their individual opinion as to whether or not to adopt the GSP as the framework document to help assure Borrego's groundwater sustainability for the next 20 years. The GSP was first published by the U.S. Geological Survey in 2015, and the Advisory Committee met 18 times over the past two and a half years to discuss GSP details, including how it would be implemented between 2020 and 2040.

The purely advisory vote was based on four levels of consensus and two of disapproval: Consensus required a vote of 1) Unqualified "yes"; 2) Acceptable; 3) Can "live with" the decision; or 4) Stand Aside. "More work is needed" and "Block the decision" were also available to AC members as options five and six, respectively.

The tally was 6 – 2 in favor of adopting the GSP. The six members approving adoption (Jim Wilson, Bill Berkley, Suzanne Lawrence, Gina Moran, Rebecca Falk, and Gary Haldeman) found the GSP either 'acceptable' or that they can "live with" his or her decision to recommend adoption. Two members (Jack McGrory and Jim Seley) voiced the opinion that "More work is needed" on the document before they would vote for adoption. Ryan Hall from the Borrego Water Coalition was not present, and did not vote.

GSP Plan Manager James Bennett authored the document, and it was based on input from and guidance by our Groundwater Sustainability Agency (BWD/County Core Team), the nine-member Advisory Committee, and outside consultants. Public input was also taken into consideration and included in the revised Draft Final GSP.

The GSP included both historical- and science-based info and data to guide decision makers on critical management programs and projects going forward, including baseline pumping allowances and projections of future water restrictions, land fallowing protocols, water quality monitoring and reporting, long-term effects on our community, and many others.

The Draft Final GSP intentionally did not include specific wording on individual programs or action items, meant to avoid protracted and expensive litigation; such specifics would, if adopted by the County Board of Supervisors and the State, be spelled out in more detail during implementation where action items could either move forward or be challenged.

The two AC members who voted "More work needed" on the GSP (McGrory and Seley) were influenced by the impending public release of a "Stipulated Agreement," now in the final stages of negotiations by the major Valley pumpers (Agriculture, Golf Courses, and BWD). The Agreement would adopt the GSP as a "Physical Solution" and contain much more detailed information than the GSP as written.

A WaterMaster Board, under the supervision of a judge, would implement the GSP-related management programs and specific action items. Votes by the Board or rulings by the judge would not, for example, be subject to water rights-related challenges because of prior Agreement approval by the pumpers themselves. Also, judicial rulings are exempt from California Environmental Quality Act (CEQA) requirements.

The work of the GSP Advisory Committee is done, but soon the actual work involved with the GSP in sustaining both the quantity and quality of our groundwater will be at the forefront for many years to come.