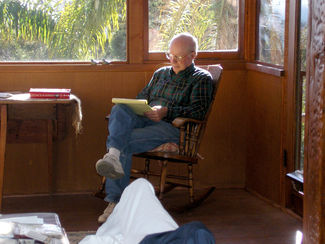 William D. "Bill" Wright, born August 1, 1931, the most beloved, admired, and respected resident of Borrego Springs, passed away at home with his family at his side on Oct. 1 at the age of 88. His legacy of generosity and work ethic as a true champion for Borrego Springs will continue to inspire current and future generations.

Appreciation for not only Bill's charisma and extraordinary character, but also, along with his wife of nearly 61 years, Jenny, his contributions to the well-being of our town for almost 40 years are reflected in the outpouring of love and gratitude by those who knew him best. The words speak for themselves, coming from his family, friends, business associates, members of Borrego's non-profit organizations, and literally every resident in Borrego who ever met this extraordinary man.

He was born in Saginaw, Michigan to Alfred and Macel (Clapp) Wright. The family moved to Traverse City, Michigan, where his father opened his own drug store. Bill was joined by his sister Joyce (deceased) and brother Jack.

In 1958, Bill married Edna "Jenny" Foster of Lees Point, Michigan. They mimicked Desi and Lucy, and pulled a long trailer out to California for a grand tour of the southwest. They fell in love with Santa Barbara where they settled. Bill got a job selling cars for Tom Williams Cadillac while Jenny began working in her profession as a physical therapist at County General Hospital.

Bill belonged to the Optimist Club, the Santa Barbara Jaycees, and Los Fiesteros Dance Club (he was quite the jitter-bugger). As a member of the Jaycees, he was instrumental in obtaining the parking lot for the Childs Estate (Santa Barbara Zoo) from Tom Storke. In addition, he led the Jaycees in building the train tracks at the zoo and also started the Zoo B Que.

Bill and Jenny loved to travel so they quit their jobs and traveled in Europe for three months. Upon returning to Santa Barbara, Bill started his own real estate development business. He located sites for developments around the U.S. in addition to his own projects. Jenny headed the physical therapy department at Santa Barbara Medical Clinic.

He was happiest when he had all of his family together or when he was building something. Whenever he talked of either of those things, his face would light up with joy. Thankfully, he had three generations of his family with him when he passed. ~ Jeanne Bortolazzo, daughter

Bill and Jenny loved flying and used their Piper Dakota to fly to their businesses around the state. He was as much a feature in Borrego Springs as are the warm climate, dark night skies, and spring wildflowers. Bill and Jenny first came to Borrego Springs for a visit in 1968 but didn't purchase the RoadRunner and Springs at Borrego RV Park and Golf Course property until 1980, where they made it their home.

My dad was the quintessential entrepreneur, someone who had visions of things that did not exist and then would build them. His dream of a very nice RV park in Borrego Springs came to be in The Springs RV Resort, which has been recognized repeatedly as one of the highest-rated RV resorts in North America. ~ Dan Wright, son

For several years after purchasing the RoadRunner Club, Jenny flew the company plane down from Santa Barbara to manage RRC operations. "We spent many an hour on the map of the RRC," she said, working out a more consistent rate structure for rentals. She was the "nuts and bolts" of RRC management while Bill was off attending other "stuff."

On the subject of RRC/Springs management, Bill once stated there are different property managing "styles," a popular one being partnerships stressing the business/re-sale side of things. But the Wright's have for nearly 60 years kept their properties "in the family, and for the long haul," he said.

A family man, entrepreneur, smart, convivial, a civic minded giver, and a good man with a great sense of humor. Bill Wright enjoyed doing, and we all enjoy what he did for our community. ~ Bill Berkley, Rams Hill

Full article in the Oct. 17 issue of the Borrego Sun.