"Car Nation" Take Over at The Mall 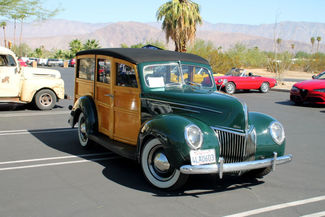 Following the annual Borrego Days Parade Saturday Oct. 19, a car show was held at The Mall, put on by Bill Daemke.

The car show, dubbed as, "Car Nation," was an addition to the Borrego Days festivities this year, and was moved up to The Mall. The new location allotted more space for a bigger pirate encampment and kids zone at the Circle. It also gave visitors a chance to shop at the various stores in The Mall.

The '84 GT was powered by a V-6 motor that Alfa Romeo had purchased the rights to reproduce from Ferrari. This engine looks just like what it is, a Ferrari V-12 that was engine was a very reliable, good performing engine for several Alfa Romero models over the years.

There was also a very well-restored '71 Lincoln Mark III in the show, along with a nice '72 MGB roadster. The nicest vintage car was a 1939 Ford Woody that belongs to Roger Evans of Borrego Springs. Of course, Henry the Truck was there too making its spiffy appearance.