Annual Pints 4 the Park Another Success 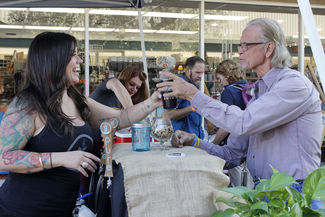 It was yet again another successful event, as many gathered at the Mall Courtyard for the annual Pints 4 the Park event, hosted by the Anza-Borrego Foundation.

Many were in attendance at the sold out event Oct. 19 to wind down and enjoy great beer, delicious food and just have a good time with friends and family, all while supporting a good cause.

Pints 4 the Park is a collaborative fundraiser to support the mission of the Anza-Borrego Foundation, the official nonprofit partner of Anza-Borrego Desert State Park. They provide financial support for Park programs, acquire land for conservation in and around the Park, educate the public about the Park's resources and support research relevant to our region.

Burning Beard from El Cajon and Pure Project from San Diego were the beer providers this year.

The Pure Project started back in 2013 when two friends were backpacking with other friends in the Rocky Mountains, and before they knew it, they were crafting the idea of opening a brewery together, which opened in 2014. They currently have three breweries and tap rooms in locations around San Diego.

All of the tap rooms have a distinctly different vibe while all being unmistakably PURE in origin. They strive to provide much more than just a place to grab a beer, but rather an unpretentious atmosphere to build community and friendships around shared passions for agriculture, the art of craft, education/learning and of course beer.

They have over 200 different beers crafted, and donated over $80,000 to non-profits.

Once again, musical entertainment provided by Dennis Franklin & Friends Cameo Revue was rockin' and rollin' while guests enjoyed the delicious tastings from Carmelita's, who served taquitos, beans, rice and chips.

To make this event possible and successful for another year, the sponsors played a huge role – Borrego Outfitters, Carmelita's, the Chamber of Commerce, Fredericks Ancient and Ethnic Art, Burning Bear and Pure Project.

With the hard work and dedication of those involved at the ABF, with the support of Ben and Ann Nourse of Borrego Outfitters, was instrumental in the success once again.