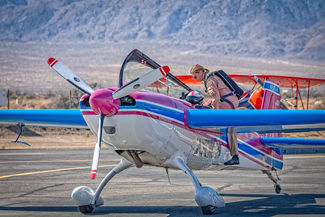 The skies were clear and the sun shone bright on just another beautiful day for stunt flying in Borrego. The International Aerobatic Club's Akrofest, hosted by Chapter 36's Paul Miko, had Borregans' eyes to the skies during their competition on Oct. 10 – 11. The annual contest was focused on about 20 stunt pilots doing maneuvers known and practiced, but also unknown (up until the previous night) and wholly un-practiced. They flew in " the box" one kilometer on a side starting about a thousand feet above the ground.

Three of the five aerobatic categories eligible for awards were represented in the competition – Primary, Sportsman, and Intermediate. There was only one pilot in the Advanced category, and none in Unlimited. Aircraft represented included the YAK-54, bi-planes of the Great Lakes type, and hi-performance 300 series Extras.

A few of the big names in aerobatics not participating in the competition were Unlimited category pilots Jim Bourke and Hiroyasu Endo (Mr. Moto). However, Bourke showed up on the airfield and was present at the awards dinner.

The first day of competition began with a serious glitch – the fuel pump on the main aviation gas tank failed. They couldn't just drive over to the Mirage Gas Station for a fill-up. The pump failure could have disrupted or even ended the competition, but Akrofest organizer Paul Miko, together with the competing pilots and ground crews didn't panic.

There was still enough fuel for planes already in the queue, they ordered and received AvGas gas from Thermal, and they called in the contractor responsible for airport maintenance. Needed pump replacement parts were ordered and shipped overnight. The problem was fixed in about 24 hours, with little or no disruption in the aerobatic contest.

On the flying itself, the pilots were calm on the ground but fiercely competitive in the air. The Intermediate category had nine pilots, including last year's Akrofest Second Place finisher in the Sportsman category, Susan Bell.

Last summer at the National Aerobatic Championships in Oshkosh, Wisconsin, Bell moved her game up a notch and won First Place in the Sportsman category, beating out 18 other stunt pilots flying her pink and blue Extra 300. "They're all gunning for me now," she remarked at the Hammerhead contest here in Borrego back in October.

She then moved up into the Intermediate category, and in this year's Akrofest she was ready for the challenge. And then, during her "known" maneuvers on the first day of competition, she encountered a serious problem with her visor. "I can't see," she said to herself and to the ground controller.

For a Borregan driving eastbound on S-22 at sunrise, this might pose a minor irritation, but for a stunt pilot in a steep climb during a competition, it was a lot more than mere irritation. Her visor kept slipping down, at times completely obscuring her view.

Bell finished in second place behind some incredible flying by Intermediate category First Place winner Howard Kirker. His 5,108 point total in his Known, Free, and Unknown flights bested Bell by 235 points. Even with no visor malfunction, that's a lot of ground to make up.

However, Bell came close in her Free Performance, only six points behind Kirker, and also with an average of about 100 points above six of the seven entrants in the Intermediate category. As the only female stunt pilot sponsored by Butler High Speed Custom Parachutes, she is a pilot to watch in future competitions.

Unfortunately for spectators, the popular Unlimited class " Four Minute Freestyle" that usually includes spectacular maneuvers, trailing smoke, and music for the crowd was cancelled because only pilots in that category are qualified to fly such complicated and inherently dangerous maneuvers; there were none in the competition where a forecast of high winds deterred their participation.

At the awards dinner at the Borrego Springs Resort, Paul Miko gave special kudos to Chief Judge Michael Church for " selflessly staring into the sun hour after hour" during the two-day competition. He also thanked the entire Borrego community for their support, especially Airport Manager Viki Cole.

We Borregans will keep our " eyes to the skies" at the next aerobatic show.