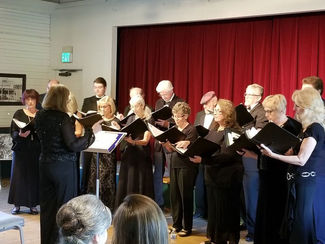 Broadway, the Golden Age, started the beautiful history of Broadway music in the 1960s. On Sunday September the 22nd the Julian Arts Chorale recalled the songs, presented a beautiful concert celebrating Broadway recalling the music of 1943 to 1959 under the direction of Garnett Welch.

The show, featuring some of the best loved music of mid-century drew a large audience of Julian residents who remember the songs from times past. Music had been composed by several musicians, primarily the team of Oscar Hammerstein and Richard Rogers, "The Sound of Music," "There is Nothing Like a Dame," "It Might as Well Be Spring. Songs written by other composers include "Guys and Dolls" and "Luck Be a Lady" by Frank Loesser."

Composers created a musical theater by presenting a musical play where songs and dances were integrated into a dramatic story. An early one of the first of these, Oklahoma, ran for 2,212 performances and won a Pulitzer Prize in 1944.