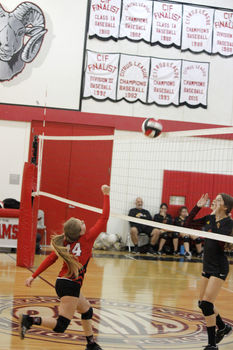 Senior Danielle Del Bono attempts to save the Lady Rams' rally, hitting the ball over the net.

The Borrego Springs Lady Rams volleyball team looked to keep their win streak going, as they were back at home Sept. 12 to face the Calvary Christian Academy Lady Royal Knights in a non-conference match.

The team hoped to keep things going as they faced the Calipatria Lady Hornets in their first Southern Manzanita League game of the season. However, the game took place after print.

The first set against CCA was kept close as both teams could not get a handle on the ball, committing multiple errors. With a 5 – 4 score on the board, sophomore Brianna Del Bono started the Lady Rams' lead going with back-to-back aces to put the team up 7 – 4.

The Lady Rams' began to run away with the lead, 14 – 6, thanks to multiple hits and aces by freshman Jimena Ochoa.

However, with minor errors, it seemed that the lead was slipping away, with the Lady Royal Knights getting within four, 15 – 11.

Senior Delaney Barclay served up a couple of aces and even a kill to help her team, getting that focus back in order, 18 – 11. It was all Lady Rams from there, and a final ace by junior Marla Manzano sealed the first set, 25 – 13.

The second set started a bit rough for the Lady Rams with CCA taking advantage of their miscues to take a 3 – 0 lead to start.

An ace by Ochoa put Borrego on the board, followed by back-to-back aces by senior Danielle Del Bono to tie it 3 – 3.

Both teams took advantage of each other's wild hits and errors going back-and-forth.

CCA got within one, but just like Barclay, Manzano followed with a kill and ace, 14 – 11 Lady Rams led.

A big block at the net by Brianna Del Bono got the momentum to pick up for the Lady Rams.

Multiple hits from the team and great digs to save the rally, the Lady Rams were back on top, taking the second set.

Picking up right where they left off in the second set, the Lady Rams started the third set 3 – 0, after aces by Manzano.

This set started a bit slow, with minor errors by both teams. However, this did not stop the Lady Rams from building their lead.

Borrego was up as much as 20 – 11, after back-to-back aces by sophomore Isabel Arteaga.

The team allowed two more points for CCA, before closing it out to complete the sweep.

The Lady Rams definitely had solid communication on the court, with better ball control to keep the rally on the positive side. Again, season is still young with many things to continue to work on, and the Lady Rams look to be up for what is to come as season begins to progress.

Only the varsity team will travel to West Shores in another league game Friday Sept. 20. Game begins at 3:30 p.m. JV's next game will be against Warner Springs 4 p.m. Sept. 24 at home.