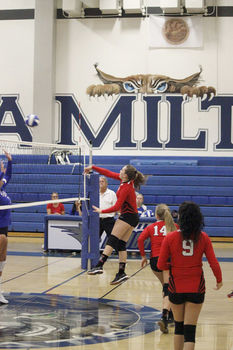 It was a harder fought game compared to the last time these two faced off.

The two teams faced off against each other once again on Sept. 3 for the Lady Rams' first game at home, which took place after print.

In what seemed to be a long first set of the game, the Lady Rams and Lady Bobcats went back-and-forth, committing multiple errors on both sides of the court.

With both teams tied 7 – 7, miscommunication by the Lady Rams came to haunt them, as they were down 11 – 7.

A short serve by the Lady Bobcats stopped their rally and their rhythm, 11 – 8.

The Lady Rams chipped away to inch closer to the Lady Bobcats. After a kill by junior Marla Manzano, the deficit was cut to one, 11 – 10.

Back-and-forth the score went, but with multiple aces by senior Danielle Del Bono, the Lady Rams were in the lead for the first time since the start of the game, 17 – 16.

The second set was a rough one for the Lady Rams, who could not get past the dominance of the Lady Bobcats who built a lead that simply was too much.

With no chance of even handling or rallying the ball, along with minor errors, the Lady Rams found themselves down, 7 – 0.

The Lady Rams were finally on the board after a tip by sophomore Briana Del Bono, 7 – 1.

Despite chipping away little-by-little in hopes of catching up and keeping the game close, letting the set get away, 25 – 8.

In the third set, the Lady Rams found a bit of their momentum that was lost in the second set, working consecutive rallies to take an early 3 – 2 lead.

It was a fight until the end, and an ace by sophomore Brianna Del Bono ended the third set, 25 – 18.

The fourth set for the Lady Rams started off on a bad foot, similar to the second.

No rhythm could be found for the Lady Rams as they were down 11 – 2.

It seemed the Lady Rams were bouncing back with back-to-back aces by sophomore Isabel Arteaga and errors by the Lady Bobcats, the team cut the deficit to 13 – 8.

The game was close as both teams fought to get that last point of the set. However, with a miscue by the Lady Rams, the game slipped away, and they dropped the set, 25 – 21.

In the fifth and final set, the Lady Rams were not going to go down without a fight, starting the set with five straight points.

However, the Lady Bobcats found the weak points to capitalize on, and managed to tie the game 7 – 7.

With a great save by the Lady Bobcats, they managed to take their first lead of the set, 9 – 8, but a spike by senior Delaney Barclay tied the game back up at 9.

With tensions rising on both sides of the court, anyone's game, the Lady Rams were down just one 14 – 13.

However with a serving error by the Lady Rams, 15 – 13, a sure heartbreaking one, but one to definitely learn from with the season progressing.

The Lady Rams are back in action 6 p.m. Sept. 12 against Calvary Christian Academy at home.