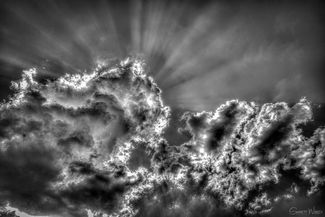 Then on Sept. 10, we hit the two-digit midget mark once again. On that morning at 6 a.m., the daily temp was at its low point of 68.4º F, the lowest daily minimum temp recorded since July 10, according to Park HQ official weather data. If it didn't exactly feel like winter, it was at least one lonely sign of hope for a cooling trend.

Perhaps as the brightest signal to forthcoming September heat relief, the late-night/early morning hours on the Sunday of Labor Day weekend brought thunderstorms and a spectacular lightning show over the surrounding mountains.

Starting on Friday Sept. 6, it was just another beautiful weekend in Borrego – perfect morning conditions for golf – where cloudless skies and low humidity made the 100+ afternoon temps tolerable. These conditions were followed by generally declining daily high temps and humidity through Sept. 10 that lasted all of two more days before the temps surpassed 100º F again; however, relative humidity remained low during this same period.

As for the rest of September, we can look to the AccuWeather forecast for temps at around 100º F through the weekend following publication of this issue, and then look back to last September to see that we had only four days where max daily high temps fell below the 100º F mark. If past is prologue, we'll be in for hot weather –hopefully not stifling hot and miserable weather – through the end of the month.

As with forecasts for mid- to late-September, the only way to forecast weather in October is to look at previous Park HQ data, hoping that neither short-term but anomalous weather patterns or even long-term effects of climate change don't alter the schedule. So here's the 6-year history of the most recent October temperature and rainfall in Borrego according to Park HQ data:

So we'll just have to wait, stick our heads out the door and see what gives, along with an update in the Oct. 3 issue of the Borrego Sun on the weather forecast for the Borrego Days Parade on Saturday Oct. 19.