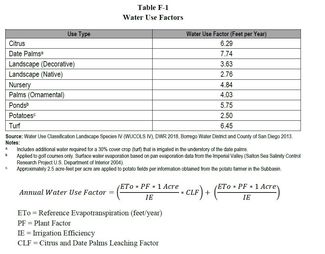 It's been four years since the U.S. Geological Survey published its seminal scientific Report on the status of Borrego Valley's groundwater.

In those intervening years, our Borrego Water District (BWD), the County, a nine-member GSP Advisory Committee, technical consultants, community service organizations, and concerned private citizens have all struggled to come to grips with how to responsibly address the 2015 Report's inescapable conclusion that pumping water at historic rates was unsustainable.

A 75% reduction was needed to bring into balance our one and only source of potable water but also for all our agricultural and recreational water needs. The GSP is very general in its wording, leaving specific program and project details on how to go about implementing the Plan.

This article summarizes a few of the salient parts of the Draft Final GSP, and we at the Sun will be reporting on important details in subsequent issues.

For purposes of bragging rights, the Borrego Subbasin GSP has the distinction of being the first of 21 State-identified critically over-drafted aquifer basins to reach this critical stage of documentation and approval.

The Borrego Springs Community Sponsor Group approved the GSP by a unanimous vote on Sept. 23, and the full GSP Advisory Committee will also meet on Oct. 4 to weigh in on their approval. Just prior to the Jan. 31, 2020 deadline, the GSP will be sent to the State Department of Water Resources as a "deliverable" required under the State grant to fund production of the GSP.

In a change to the original procedure, the Board of Supervisors will probably not take a formal vote on adoption of the GSP. This is because of a Stipulated Agreement in the offing between pumpers extracting more than two af/y of groundwater.

The details of the Agreement, according to BWD General Manager Geoff Pool and the GSP Plan Leader, James Bennett, are far more detailed than the GSP's general outlines.

Key ingredients of the Stipulated Agreement include a quicker time time and an accelerated schedule to sustainability, thus front-loading a majority of the pumping reduction into the first 10 years of the 20-year schedule.

The Stipulated Agreement, its final details still being negotiated as this issue of the Sun goes to press, would substitute a WaterMaster Board for what was originally proposed, a BWD/County-based GSA.

The Board would consist of a five-member commission plus a presiding judge to, among other duties, rule on legal challenges; The potential impacts of his/her rulings are not subject to CEQA requirements. In extreme cases, he/she might even overturn a Board decision if circumstances warrant.

The WaterMaster concept is meant to stave off protracted and expensive litigation over future GSP implementation details that are now merely generalized in the source document. Whether by way of GSA or WaterMaster Board, the GSP will remain the framework and source document for sustainability programs and projects going forward to 2040, and it will be attached as the official "Physical Solution" to an approved Stipulated Agreement.

One key feature of the GSP (and the Stipulated Agreement) is the use of scientifically based methods to develop and analyze data – objectivity, reliability, consistency, and fairness are all desired and necessary to preclude undue influence in decision making.

There are 41 identified pumpers in the Valley using more than two af/y of groundwater – BWD, 30 Ag pumpers, six golf courses, and four others. There was only one major agricultural pumper out of 30 whose historical pumping data was validated for inclusion in the metering program. The other 29 pumpers must now rely on an external method of determining BPA to deliver "validated historical production data" to the County; they will have their BPA's calculated mathematically by way of an EvapoTranspiration formula (see table below), or E-T, according to specific crop type and specific water needs.

As is the case with water quality protocols and monitoring, the E-T data must be consistently acquired, documented, and summarized/analyzed across the board; the GSP seeks to compare apples and apples, not apples and oranges for analysis and decision-making purposes within the three designated Management Areas.

And just what are the conditions in the GSP/Stipulated Agreement that determines success or failure in sustainability?

Long-term, aggregate groundwater use is less than or equal to the Subbasin's estimated sustainable yield; the rate of groundwater level change within the Subbasin is generally stable or increasing when compared to the contemporary groundwater level trend; Groundwater levels are maintained at elevations necessary to avoid undesirable results; and groundwater quality, as measured in municipal and domestic water wells, generally exhibits a stable and/or improving trend for identified contaminants of concern: arsenic, nitrate, sulfate, and TDS.

As an example of using scientific means to achieve GSP goals, the accompanying graphic shows the quantitative means of determining water use factors with respect to BPA's for agricultural crops and golf courses ("Turf" as the last entry in the table), where a pumper's scientifically reliable and historically verifiable reporting/well production data is not available.

As noted previously, this applies to 29 of the 30 major agricultural pumpers in the Valley subject to monitoring and reporting.

A draft Stipulated Agreement is scheduled for release in the coming weeks (a 30-to-60-day public comment period is promised), and because it is expected to include far more details than the Draft Final GSP, we at the Sun will probably be reporting on that draft document in coming issues.