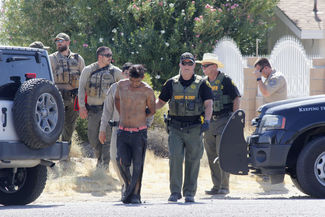 On Aug. 7, leading San Diego County Sheriff's deputies on a short pursuit, a man riding a stolen motorcycle tried to hide in the backyard of a house on Double O Road in Borrego Springs.

The motorcycle was reported stolen from a residence the day before, according to Sheriff's Lieutenant Damon Blankenbaker.

At around 7 a.m., deputies noticed a motorcycle that fit the description of the one that had been reported missing, being driven by Paulino Juarez. After refusing to pull over, he led deputies down Borrego Springs Road, before ditching the bike and running on foot toward Barrel Drive.

California State Park rangers, along with Sheriff units from Ranchita and Julian were brought in to assist in setting up a perimeter in the area, blocking off multiple roads to traffic.

A helicopter circled the valley, and residents recall hearing his name projected out telling, "Paulino Juarez to come out with his hands up."

Once the canine units from Bonita arrived, Juarez's evasion ended with the dogs quickly picking up his scent. Within about 10 minutes, they located Juarez behind the house on Double O.

He was then handcuffed and escorted by Deputy Sheriff Mike Stacy to a patrol vehicle.

Released on bail Juarez was reportedly deported to Tijuana.

Blankenbaker said investigators are unsure if Juarez is responsible for some of the recent break-in's that have occurred in Borrego Springs. Both are reported to have had possession of stolen property at arrest.

"We urge everyone to be sure that they are locking their stuff up, and keeping it secure," Blankenbaker said. "And if they do see something suspicious, call 911 right away."