"The Music Man" A Hit 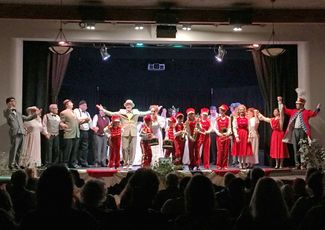 Based on a story by Meredith Willson and Franklin Lacey, the story line surrounds Harold Hill, a con man who comes to town masquerading as a band leader interested in swindling the community out of their money. Over the course of the play, Hill wins over the local librarian, Marion Paroo, and the hearts of viewers.

Along with this great show, the Julian Theater Company (JTC) offers theater workshops and movies at Julian High School.

JTC has played an active role in providing a bit of the arts culture to the community with A Christmas Carol, Love Letters and many others that were performed at the Pine Hills Lodge.

The production is playing at Julian Union High School's Little Theater during the weekends in September until the 21st.

Tickets can be purchased online or at the door.