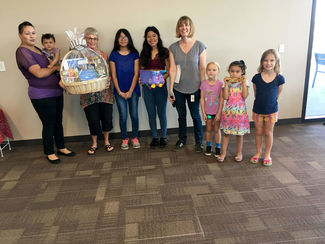 There's nothing like enjoying ice cream and listening to a live band in the air-conditioned spaces of our Library to bring folks in for a break from Borrego's August heat wave.

The band originally scheduled, Trails and Rails, were unable to make the trek to Borrego Springs. The Pony Tales with Cathy and Doreen Harlow filled in nicely as a last-minute replacement. The hour-long program under the leadership of librarian Cristin McVey included guitar music, sing-a-longs, plus raffle prize winners signed up by Elizabeth Torres at the entrance, and surprises/toys for the kids. Oh, and plenty of ice cream to go around for all three dozen attendees, young and old.

"I came for the ice cream but stayed for the party," said one of the adults in attendance.

Cathy Harlow played her mandolin, but not just any mandolin. This one was saved from a watery demise during World War II by her dad, a landing craft pilot, and she made that instrument sing.

The Pony Tales led the singing of songs such as Ghost Riders, This Land, Happy Trails, and The Cat Came Back.

But the highlight of the event was audience participation in the form of seven kids and one adult holding up specific placards whenever that place, or location, or flower shown on their card was mentioned in the song.

They all had a great time with that one, memorizing the order of about eight discrete items, including a piece of donated "bling" from an audience member.

Gift cards donated by K-Mart and Kesling's Kitchen, plus a Grand Prize gift basket donated by Borrego Outfitters were also awarded at the party.