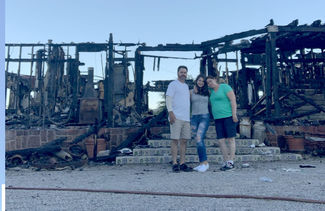 A tragic fire burned down the Bojorquez family home and all its contents on Double O Road, also causing severe burns to the father, Luis, and the loss of their beloved Pitbull/Labrador, Paloma. Their brand-new car was destroyed as well, but it was insured for fire-related loss; the home itself was not.

"A spark from the grill out on the porch got on the jacuzzi cover," said daughter Paola, a second-year student at College of the Desert, "and it ignited instantly."

Paola was lifeguarding at the Borrego Springs High School pool at the time the fire started, shortly after 5 p.m. on July 7. Paola recounted the events as told to her later by her mother, Margarita, Luis, and neighbors who witnessed the event.

Battling the flames, Luis got Margarita out of the house, but Paloma was still inside. Luis took it upon himself to run back into the fire to find the dog. Inside the home, smoke was everywhere. He covered his face with his left arm looking for Paloma for about five minutes, resulting in second degree burns on his arms and feet. The ashes and smoke became too thick for him to see and too unbearable for him to breath. With no sign of Paloma, and his own safety to worry about, Luis headed back to be with his wife. The fire department crew worked all night to put out the last of the fire.

Luis was airlifted to UCSD Hillcrest for burn treatment, and both Paola and Margarita were brought by friends to the hospital to be with him.

Subsequent to the fire, the Borrego community has responded quickly.

Fellow lifeguards raised $510 in local donations, presented inside a sympathy card (See photo); both Jilberto's and Carlee's restaurants offered family members a free meal whenever they want; furniture and clothing donations have been made; a GoFundMe page has been created (gofundme.com/for-the-family-that-lost-it-all-in-a-fire), with donations as of July 22 at $6,330; and a car wash raised $2,165 on Sunday, July 21, including a $50 donation from a de Anza resident who wasn't even in Borrego over the weekend.

There was a work party on July 20 to clean up fire damage on the Bojorquez property, but with so much volume of charred debris, a huge bin was needed, and Republic Services generously donated the bin, which cost at least $800. Finally, Chef Tom from Kesling's Kitchen allowed baker Marina to use the ovens to bake fundraising cookies that were distributed to various retail outlets.

Commenting on the extraordinary level of community support, daughter Paola said simply, "We have been very blessed."

The fire was reported to 911 at 5:09 p.m. by a Bojorquez neighbor. Chief John Hardcastle reports that FD dispatch received the call at 5:12 p.m., and that the logs show the paramedics and fire truck arrived on the scene nine minutes later at 5:21 p.m.

As for the delay in getting water onto the fire, it was a choice of hydrants, according to Hardcastle.

"They sometimes take the first hydrant they see," he said; firefighters did not carry a hydrant map, so they did not want to waste precious time looking for another one.

Chief Hardcastle added they also have a lot on their minds about how to deal effectively and efficiency with the event as it unfolds.

It was a tragic event for the Bojorquez family, but hopefully the response by residents and local businesses will ease the impacts to their lives.