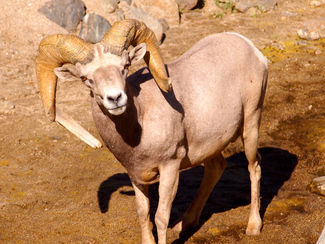 As Americans were enjoying fireworks and barbecues over the 4th of July weekend, an intrepid army of 84 volunteers were deployed to some of Anza-Borrego's most remote places to count bighorn sheep.

Under the guidance of state park environmental scientist Mike Puzzo, volunteers trekked to 20 water holes and springs where sheep would likely show up to drink between July 4 and 7.

This was the 49th annual count, an important citizen science effort that has provided what Puzzo called "thousands of hours of observation."

"Of course, the count is a snapshot in time, but it looks like herd numbers are stable and we didn't see anything of concern," Puzzo said.

A total of 273 sheep were tallied this year, compared to 225 last year, but four additional count sites were added this year due to additional volunteers. Those new count locations included Sentenac Canyon, North Palm Wash, Agua Caliente and Tubb Canyon.

"The good news is that people saw sheep," Puzzo said. Only two sites did not log sheep sightings.

Last winter saw unusual amounts of rainfall in the desert and that meant there was water at some remote locations that sometimes dry up in the summer.

The greatest number of bighorn were sighted at Rattlesnake Spring, the most remote count site requiring a challenging summer hike of about five miles and a 2,000-foot elevation gain to reach.

Volunteers Dave and Carla Kennedy and Tyler Webb logged 46 sheep at the remote spring and Puzzo said this is likely the result of more available water from the wet winter.

"Some years the spring is dry, but this year there was water and lots of sheep," Puzzo said.

Habitat conditions were also good, with a healthy supply of available browse for bighorn sheep.

Anyone who has hiked deep into Palm Canyon at the west end of Borrego Valley would not be surprised at the number of bighorn sheep sighted there.

Volunteers manned counting sights at the entrance of the canyon and at each of four palm groves to record a total of 97 animals.

"It was not only the good numbers this year, but the lamb to ewe ration is also very good. Some of this is attributable to a rainy season," Puzzo said.

Another good sign was the age of lambs indicating some were born earlier in the year than normal, allowing them to mature more before the heat of summer. This generally means a higher survival rate.

Overall count numbers included 110 ewes, 47 lambs and 107 rams. The sex of nine sightings could not be determined.

The trend of a stable bighorn population could be an important factor in how the species is listed.

Puzzo said desert bighorn sheep are currently listed as endangered, but numbers reached a point in 2016 that could lead to them being down listed to threatened.

"If sheep numbers remain stable or increase during a six-year period the species can be down listed," Puzzo said. "There needs to be at least 715 throughout the range, and we have that."

The range of the desert bighorn sheep extends from Mexico to San Jacinto in Riverside County. Estimates are there are about 900 to 1,000 animals.

The annual count brings dedicated volunteers to desert springs and water holes over the fourth of July weekend. Warmer weather means sheep are more likely to visit the few available sources of water.

Sheep count volunteers undergo training to be able to identify age and sex of the sheep in addition to their health. Additionally, they are schooled in dealing with extreme heat and the dangers they may encounter in the wilderness.

The annual event is supported by Anza-Borrego Foundation and private donors.

Some of the count locations are accessible by vehicle, while others require remote camping and hikes to the census site.

Next year will the 50th anniversary and Puzzo is hoping to continue to build the army of volunteers so count locations can be expanded.

"The more volunteers we have allows us to monitor more locations and that just makes the effort more valuable," Puzzo said.

Anyone interested in participating in the count can get additional information by e-mailing AB.Sheepcount@parks.ca.gov.