Point of View: A Tree Falls in Borrego 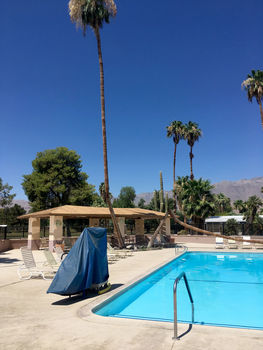 They were a beautiful pair of decorative palms at the RoadRunner Club pool area. Kind of like an old married couple who for more than half a century since the clubhouse opened was blessed with a symmetry soothing to the eyes as they grew together.

And up to now, with matching but opposite bends in their 12-inch angled palm trunks at the same height above the ground, their trunks shot vertical to a height of 50 – 60 feet to the top of the crown.

I've watched them for seven years from the pool, and they served as friendly shade from the western sun as I put my raft in station-keeping mode. But more often, I viewed them from the eastern water-jet niche in the Jacuzzi. Those palms seemed eternal, a landscape feature that would grow and bend together in the breeze but never really change, and that they would surely be here long after I'm gone.

On Sunday morning July 14, where the pair stood majestically the day before, I came to the pool only have my jaw drop: The western-most palm had shattered at the bend and was lying on the pool deck. It was a shock to the senses, a true sadness. There was just no putting this Humpty-Dumpty back together again.

But from a physics point of view, it's not hard to figure out what happened. The break occurred just below the center of the bend. That's where the stronger vertical vector force, comprised of all the mass from the top of the tree down to that point, turned into a weaker angular force below the bend.

There was already a natural strain at the bend, and it took that last straw on a camel's back for the wind to push it beyond its breaking point. The vertical striations in the trunk from just above the bend down to the break itself are clear evidence of the forces of Mother Nature at work here.

Until there's a change in decorative landscaping, the remaining palm tree will just have to get used to the absence of its long-time partner. It could break, too, under the same set of physical circumstances, or it could stand alone against the test of time.

Yet I sense a certain loneliness already.