Apollo 11 50th Anniversary at the Library 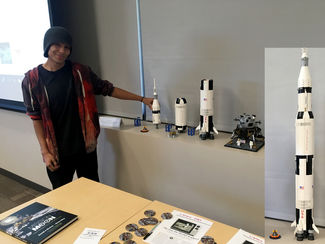 Anyone over 60 probably remembers where they were on July 20, 1969, the day Neil Armstrong and Buzz Aldrin became the first humans to walk on the moon.

The Borrego Springs Library celebrated the 50th anniversary with a film that described everything that happened, minute-by-minute, from pre-launch prep to blastoff to Armstrong and Aldrin stepping onto the Moon's surface to global reactions in real-time to the astronauts splashing down.

The drama of the live event, presented worldwide on YouTube in 2019, was exhilarating even after all these years.

On display were scale models of the Saturn rocket, the capsule, and the lunar lander. Folks also had the opportunity to write down where they were and their experience at the time of the lunar landing.

After the film, rare black and white footage of the landing was shown, covering details and conversations not previously made public.

A theme cake, made by Marina from Kesling's Kitchen, along with the beverage throw-back to those astronaut years, Tang, was enjoyed by all.