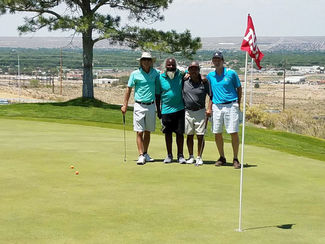 Rick Cosca is no stranger to golf tournaments. Earlier this year, he won the RoadRunner Club Championship in the top bracket, and in 2018 he was the club champ at the Fallbrook Seniors tournament.

The National Senior Games is a whole other level of competition, held every two years in a different state.

This year, the competition was held in Albuquerque, New Mexico from June 14 – 24, where nearly 14,000 competitors in 20 sports were witness to the fall of 17 American and 185 National Senior Games Records. These folks still got game.And so does Rick Cosca.

A 6-handicapper playing the practice round at the Torres Bianca course in Arizona in the 60 – 64 age group, he shot a 69, but he was there to practice different shots, not get a low score. What he didn't expect was for his back to go out on him.

"I definitely miss the jacuzzi in Borrego," he reported after that practice round. "I may need a chiropractor."

Fortunately, on the way to Albuquerque, Cosca found the hot springs in Truth or Consequences, New Mexico, and it must have helped. The first official round of golf, held on the University of New Mexico's championship course, found Cosca in a foursome evenly matched in handicap, so they played scratch golf.

Each day he played in a different grouping, depending on how they scored the day before; there were about 45 – 50 golfers in the finals.

"A little nervous" at the start of Round-1, Cosca said. He bogeyed the first hole, a par-5, but ended up shooting a 78, the low score in his group and in 7th place overall. Oh, and the playing conditions? He'd never seen the course before and drew the short straw – the toughest of four courses; elevation about 6,000 feet, requiring club distance adjustments; temps between 90 – 100 degrees the entire tournament; elevated and very fast and crowned greens; and "strong, intermittent Hurricane-type winds" the first two rounds, he said.

Is that all? The fact that he broke 80 shows up to this mere mortal as miraculous under those conditions.

"I was in the hunt," Cosca said. "I was only four strokes off the low of the day in the entire field."

He later commented that he had some trouble reading the course.

For the first round, he couldn't see some of the pin placements, and he knew the greens were fast, but had no idea on how they broke, making it trial and error for Cosca and the other three members of his foursome, as well.

"Sometimes when you thought they were uphill, they were downhill," he said with a laugh.

Cosca figured out the green speeds by day-3, but sorely wished he could have gotten there two weeks earlier and practiced on the course, especially the greens. A caddy who knew the course would also have helped, but that recruiting effort didn't pan out. However, Cosca's game strategy never changed.

"I played my own game. Each shot and each hole independently," he said, ignoring his running score and those of his opponents. "Because trying to manage what you're doing gets things screwed up."

The next day in Round-2, playing in a foursome with better players than in Round-1, and still trying to figure out speed and breaks on the greens, Cosca shot an 83, with 20 – 30 mph winds and thunder/light rain to contend with. The winds were a real problem, he said, as the greens were drying out.

"A downhill three-footer could easily turn into an uphill eight-footer, he said. "So I played defensive golf."

His back was still giving him problems, and he took a triple bogey on #10. For the final round, Cosca decided to play more aggressively.

"It panned out," he said, despite a substantial increase in his back pain. "I wasn't going to be short on my putts."

Unlike his triple bogey the day before, Cosca birdied #10 with a measured 83-footer that astounded both himself and his playing partners – and a small gallery of followers. With not many birdies out there for the taking, he had just birdied #9, and was soon to have another birdie on #13.

It all really came down to the par-5 18th hole. Cosca's back was aching, and he was tired. His drive landed in five-inch rough.

Instead of punching out, or having a caddy with whom to consult, he went for the red flag close to the front of the green. Problem was that his ball didn't, and it landed in a deep bunker 70 yards from the pin. Not able to even see the flag, he landed his next shot in another bunker, and it took three swings to get out of that trap and onto the fringe. Two strokes later, he was finally in the hole, but with a snowman – an eight. He didn't get upset, but rather accepted his fate and shook the hand of the guy who birdied the hole and medaled.

If only Cosca was able to play relaxed, his back not having given out, and had he parred or birdied either the 10th hole in Round-2 or the 18th in Round-3 (or both, not out of the question for his game), Cosca could have medaled. So much for "if only's." It's fair to say his three-day running total of 78, 83, and 78, while good for most of us, was certainly not his best effort.

But Cosca is not a complainer and doesn't make excuses.

"I had fun and totally enjoyed the company," he said after the tourney ended.

In two years, the Senior Games is going to Fort Lauderdale, Florida.

I wouldn't bet against Rick Cosca winning that bracket outright next time.

Meanwhile, he will be preparing for it by taking frequent Jacuzzi's at the RoadRunner clubhouse, and later playing in the Huntsmen Senior Games in Utah this coming October. His time is coming.