Weather Or Not in Borrego 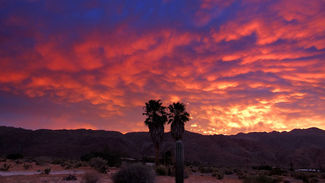 Spurred to new heights by a heat dome over Europe and Alaska, high temperature records in the Northern Hemisphere are not merely being broken, but rather shattered.

In Anchorage, all-time record temperatures (90º F) were set across the state on July 4, the highest temperature since recording began in 1952, according to the National Weather Service.

In Borrego Springs, we've had a bit of a respite. Unlike 2018, where temps stayed above 110º F for an extended period, and even maxed out above 120º F for a few days, our local temps have been mild by comparison to last year.

The European average temperature for June 2019 was the highest on record for the month, averaging more than a 3.6º F rise above normal; in France, Germany, and Spain during the final days of June, the temps were 11 – 18º F above normal.

Here in Borrego during June, we dodged the sweltering heat bullet almost entirely, except for the consecutive days of June 11, 12, and 13 when we went over 110º F.

June 11 was the day the cyclists from Race Across America came through Borrego, their first timing station. It was 111º F, but it could have been worse.

The recent heat wave in France was the source of the hottest temperature in the country's history (115ºF), and there were wildfires across Spain where temps exceeded 104º F.

During the last week of June, Poland and the Czech Republic also recorded their highest temperatures every recorded.

No schools were closed in Borrego by the heat, but in France, thousands of schools had to close, and hordes of adults and kids found relief by swimming in the fountains near the Eiffel Tower.

A term that may raise public awareness, perhaps even alarm for some, in future years of record-breaking heat waves, is the actuarial term, "excess mortality." That refers to unanticipated deaths from heat stroke and other effects. The actuarial numbers associated with the European heat wave in June, in reference to global warming, are expected to be published soon.

In the accompanying graphic depicting an accumulation of June temps, both European and Global averages are on the rise.

120 years of data is a pretty good baseline to assess whether or not climate change, specifically global warming, is in fact happening on our planet.