Truths About Haiti: Part One 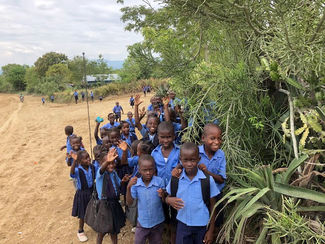 My recent returns to Haiti were surprisingly more exhilarating and less emotionally challenging than my first trip earlier this year. I went to help a good friend (and out of my own curiosity) as a supply mule for her medical Non-Government Organization, or otherwise popularly known as NGOs, one of about 10,000 in Haiti.

My travels took me over two mountain ranges and through many villages to the provincial town of Hinche, located in the once lush Central Plateau, with a population of about 50,000 in the surrounding area.

It was the first farming establishment settled outside of Port Au Prince and home of the first Christian Church in the western hemisphere. I've had the luxury of traveling through many countries like Peru, Italy, France, England, Jamaica, the Bahamas, Mexico, Puerto Rico, Belize and most parts of the USA and Haiti didn't offer anything shockingly unfamiliar or unusually unseen. The ride was quite pleasant and with the recent edging towards the wet season, the rain turned the straw like depleted landscape into moss covered rolling mountains and hills, much like Hawaii.

I have not been to anywhere in Africa, the Middle East or India, and I've heard these regions are the next level of human struggle. But Haiti looks much like it's neighbors in the Caribbean, minus the well evolved layer of five-star hotels and luxury tourism entities and the people that ensue.

Haiti had a competitive tourist economy leading up to the 80's, but it was dismantled by government conspired corruption, large scale industrial exploitation and well-placed bad publicity. Meanwhile, Haiti is the poorest country in the western hemisphere yet it manages to export billions in crops and refined product. All under the umbrella of an aggressive campaign of what people don't see won't hurt them and look how misbehaved they are, proximate off shoring is even more profitable.

"We thought we were doing the people of Haiti a favor."– Bill Clinton.

It reminds me of Alan Greenspan or Bernie Madoff. I can remember as a little girl, sitting around the TV, watching everyone waiting for Alan Greenspan to speak, "Alan Greenspan is scheduled to dictate the mortgage interest rates."

All I can remember was thinking to myself, how can this one guy control everything, he must be corrupt? I was nine-years-old. These are the same people who are giving all their money to a guy with the last name Made Off? Really, that's a joke.

The traffic in Port Au Prince is extremely intense and competitive, very quickly I came to the conclusion that Haitians can drive in Europe. If you've ever circled through the Piazza Del Colosseo or slithered up the Amalfi Coast in Italy you would notice the resemblance.

The only difference with America, and the commonality with Europe, is the lack of road rage. The Haitian drivers play an intricate game of chess, as they navigate the straightest line possible, politely accepting positional checkmates while pausing to greet, most likely a relative, on the way. There are traffic rules even if not indicated, I did witness the police ushering a car over for a ticket after turning the wrong way.

When we stopped at a building supply store, I was shocked and dismayed at the prices listed in U.S. dollars. They were competitive and the most necessary items were outrageous. It baffled me as to why in a country with no public sanitation can sell a garbage can for $80, and that's U.S. dollars. In fact, the entire home building supply store, as well as a store resembling Walmart raised the awareness that the U.S. market was not that far away.

It also became apparent that Haiti isn't cheap and apparently these highly evolved businesses are owned by capitalizing Cubans. Of course the street markets, street food and basic accommodations are affordable by most standards, once you cross an economic line, things align with current market prices.

There were other contradictions to what was reported by the media on Haiti, whether be the history or current situations. The currency situation is also another shady and seemingly corrupt market. Items in stores and appearance wise commercial establishments are paid in U.S. dollars, if all you have is Haitian money, they charge you more. Contrarily, the local markets stores and restaurants all want to you to pay with Haitian money for reasons I couldn't quite work out.

Also, they want crisp clean U.S. bill in 10's, 5's or 1's. When I entered the country, I went to pay my $10 entry fee with a relatively clean Thomas Jefferson and they lady pointed out it had a small tear and refused to take it. Fortunately, I was able to produce a bill to her standard and when I commented, "It all spends the same."

She laughed pretty hard but her body language conveyed her disagreement. It is the attitude of the nation and I find it somewhat humorous because the Haitian money, meaning no disrespect, is artistically beautiful, but downright dirty and disgusting. Also, what's ironic is that Haitians are the descendants of the the richest colony in the history of the western hemisphere. Despite what the history books print, Christopher Columbus did not land in Florida or Cuba or the DR for that matter. He landed in Port Au Prince.

Snaking out of Port Au Prince with a orchestra of horns chiming in with a heaving town, it definitely has the feel of as if New York was flat. Vendor after vendor precariously showcasing items along the side of the road and sometimes in the road, some appealing, some not so much.

Things are slow and clustered, neglected and crumbling but the people are clean and busy, bustling about in a world of little modern convenience. The roads are damaged but passable and the winding path over the mountains is treacherous, especially for heavy trucks whose wheels easily become jammed in the side ditches and flip over. The trip to Hinche takes about three hours given their road conditions. Along with the mossy rolling hills and teeming greenness comes a lot of mud, particularly on the roads.

This is similar to driving in snow, wheels spinning, car sliding, the driver gauging weight, angle and speed in efforts to maintain momentum and not get stuck.

Efforts to try and allow passing cars, unfortunately can produce tragic results even death, as we witnessed a body covered with branches and a grieving family waiting for authorities. The countryside is peaceful but barren, evidence of deforestation apparent and screaming for attention. Families gathered out by the road, cooking, eating, drinking or playing the lottery, available at a stand every few miles.

The first time I went to Haiti I stayed in a well appointed American hotel and an NGO house which had no hot water, shotty plumbing and a generator that worked most of the time when the city power was cut.

The second time I stayed in an older hotel in Port Au Prince and then a resort in Hinche. The resort had a Cuban feel and you could tell it was at one time a very nice place.

Currently, the grounds are down about a foot and the biggest attraction is Ponn, the peacock. The resort charges about $50 a night which is not cheap for horrible plumbing (forget hot water), disgusting linens and power only from 5 p.m. to 7 a.m. There were not many guests at all and the only activity was an evening political chat around the pool that sounded like aggressive fighting and was downright scary to the delicate ear, but in reality, it was just some heated debate. It had the same resemblance to the restaurant, the only restaurant we ate at, gutted and pilfered.

As I sat in the Cuban style eatery, the building had the feeling of being raided. Void of switch and outlet plates, door handles sometimes even doors, overhead fixtures were scraped and ceilings, walls and floors were picked of what once was, replacement fixtures pale in comparison to the imagined originals. I ate a lot of goat.

The third time I went to Haiti I stayed out in the country. That's right, by myself 15 minutes outside of Hinche.

The population continues to thin as we creep out further into the countryside. Passing by vast acreages of abandoned rice fields solidifies the results of America's "good intentions" like a sprawling monument with dried crops sticking straight up like scarecrows in danger of petrifying as a result of their abrupt abandonment. The one thing Haiti needs to be continuously given for free? Knowledge.

"I have to live with everyday what I did to the Haitian rice farmers, I did that. It was a mistake I was party to." – Bill Clinton

The country and its people were very fun and quite refreshing, much like camping and money well saved by an experience well earned. Apparently not many people venture out to the country for more than a "no get out" car ride or to buy a vote.

In fact, most people go once and never come back, so I was gaining great notoriety by returning multiple times. There's something fresh and relaxing about the country. The air, the livestock, the people milling about hacking away at their daily chores as we did the same, the socializing between neighbors and the children who can't afford to go to school.

The most fun was waving at the children who would begin their trek to school sometimes as early as 6 a.m. only to return home in the early afternoon.

With huge smiles on their faces shouting, "How are you!" and "Hello!", the only English words they know. I could never find the words to express the warmth in my heart as I bring Solar power, living plants and a projector to show Little House on the Prairie to the small rural community I've nested in. Little House was very entertaining for them because that is where they are at.

They were touched and entertained by Melissa Gilbert and Michael Landon, the similarities in lifestyles and challenges rang true to them, like Pa's pipe, Laura's jealousy and plowing the fields with yoke of ox.

Another interesting fact is in the pilot, the local Native Americans visits the Ingalls in their new settlement and they speak French. I also show the new film Guava Island with Rihanna, they really loved and enjoyed the incredibly creative and relevant fable like musical.

I was shocked and surprised when they asked for The Passion of The Christ, not a family film, I opted for The Ten Commandments, boring but educational. Haiti has suffered, for many, many reasons one can only speculate and never imagine what it's like to be Haitian or live in Haiti, but these are things that I know to be true.