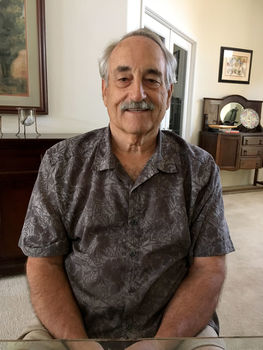 As an "institutionalist" on the Borrego Water District board of directors during his 2½-year tenure, Harry Ehrlich has helped steer the board through a host of complicated policy issues – financial solvency, critical capital improvements, and of course water supply and long-term sustainability.

He is stepping down as of the end of June.

"It was a difficult decision to leave the board," Ehrlich said. Health-related issues of his wife, Stacy, were a factor in his decision.

During his tenure, Ehrlich was focused on BWD investing wisely in necessary capital infrastructure replacements while continuing to build and strengthen BWD's financial stability.

"Harry Ehrlich answered a call to the BWD board at a critical time for the District," fellow board member and vice president Lyle Brecht, said.

"He had executive experience raising more than $100 million in debt for other water districts, which he applied for the benefit of BWD and its ratepayers. His bond and budget experience will be missed."

His time in service has been "both challenging, and rewarding," Ehrlich said.

"The impacts of BWD decisions for the present and the future of the Valley water supply are critical to long-term reliability and economic sustainability. There is still a lot of important policy work to be done for the District and the community, and I believe the District is on the path to a continued high level of service to our customers."

The Ehrlich's will retain their home at the RoadRunner Club, and Harry will still be around to consult when necessary, just not as often.

"We'll see you all in the fall," he concluded with a smile before leaving on a cross-country motorhome trek in search of cooler climes, and more quality time with family.

Meanwhile, there will be a vacuum to fill – Ehrlich's knowledge and experience that helped BWD make sound institutional decisions during his tenure.

BWD announced the vacancy as an agenda item at its last meeting, which was held after this issue went to press. It was discussed to put out a public notice for persons interested in the Director position. Whomever, the board, ultimately appoints to fill the vacancy, will complete the time remaining on Ehrlich's four-year term.